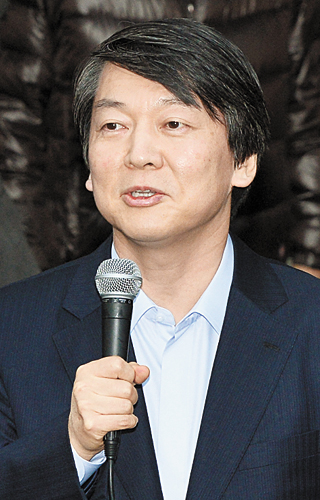 Ahn Cheol-soo, a liberal icon who ran as an independent in last year’s presidential election, will run for a lawmaker’s seat in the upcoming by-election, Ahn’s close aide said yesterday.

His return to politics is expected to bring big changes in the political arena.

“To realize new politics, Ahn has decided to run for a National Assembly seat [representing] Nowon C District in the April 24 by-election after his arrival.”

After casting his presidential ballot on Dec. 19, Ahn left for San Francisco, saying that he will think about his next political step.

The popular software guru first appeared on the political scene in the Seoul mayoral race in 2011 when he endorsed former civic activist and now Seoul Mayor Park Won-soon.

Ahn soon emerged as a political star, receiving support from mainly young voters for keeping his distance from conventional politics.

He declared his presidential bid on Sept. 19 but withdrew from the election on Nov. 23 after giving his support to Democratic United Party candidate Moon Jae-in.

According to an official close to Ahn, he will “make public his position and specific plans personally after his arrival,” including his motivation behind and whether or not he will run as an independent or affiliated with a party.

The official, however, said that the possible plan for Ahn creating his own party “hasn’t been prepared or discussed [yet].”

In the morning yesterday, Ahn is known to have had a telephone conversation with Roh Hoe-chan, former representative of Nowon C District who lost his parliamentary seat after the Supreme Court upheld his conviction for disclosing an illegally taped conversation.

With Ahn in the by-election race, competition to win a parliamentary seat representing Nowon C District is expected to be fierce.

From the ruling Saenuri Party, Lee Jun-seok, former member of the party’s emergency leadership council, and Huh Joon-young, who ran against Roh but lost in last year’s by-election, are known to be considering their election bids, while from the DUP is former lawmaker Chung Dong-young.

There are two other vacant seats that need to be filled in the upcoming by-election in addition to Nowon C District.

Kim Geun-tai and Lee Jae-gyoon, both from the ruling party, lost their legislative seats representing Buyeo, South Chungcheong, and Yeongdo, Busan, respectively, after being convicted of election bribery.