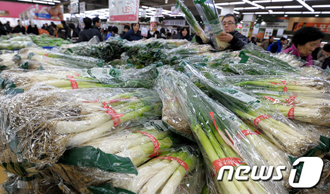 The government inflation index may shows that consumer prices are largely stable, but doubts its accuracy are mounting.

According to Statistics Korea yesterday, consumer prices grew 1.4 percent in February from a year earlier, staying in the 1 percent range for four straight months.

It is the first time that the inflation rate has been 2 percent mark for such long time since 1999, the agency said.

The growth in February mostly stemmed from costlier vegetables, petroleum products and some services, according to the agency.

On the other hand, falling livestock prices contributed to overall stabilization in prices, the agency said. Pork prices slid 3.4 percent.

Despite stabilization in overall consumer prices, there are concerns about possible spikes on the supply side, due to fluctuating international oil and grain prices, said the Ministry of Strategy and Finance.

“The government will focus on keeping inflation under 2 percent by taming possible increases in prices of food and daily necessities,” said Sung Chang-hoon, a director at the Economic Policy Bureau of the Finance Ministry.

According to a survey of consumer groups, several processed food companies raised prices about 8 percent right after the presidential election.

However, critics say the current inflation index doesn’t accurately reflect reality, which makes it impossible for the government to come up with practical policy measures.

“The government should create an exclusive index for food prices, which gauges increases in food prices based on weather conditions,” said Kim Kwang-seok, a researcher at Hyundai Research Institute. “Consumers complain of enormous price hikes every winter, as seen in the record high Engel’s coefficient in eight years, but the government index doesn’t say so, which means it doesn’t reflect the reality.”

Kim said the influence of price hikes in fresh food in the current index is too small compared to that of commercial goods.

“I think a supplementary index should be developed to gauge prices of most frequently used products by consumers.”

The government is currently revamping the system to measure consumer prices growth in order to provide more realistic numbers.

Statistics Korea revises the consumer price index every five years. In 2011, the agency amended the standard year of the index to be 2010. It is preparing to switch the year to 2012 starting next year.

“The agency is also discussing a weight revision of each item being applied to the index this year,” said Kim Bo-kyung, a director at the Consumer Price Bureau at Statistics Korea.