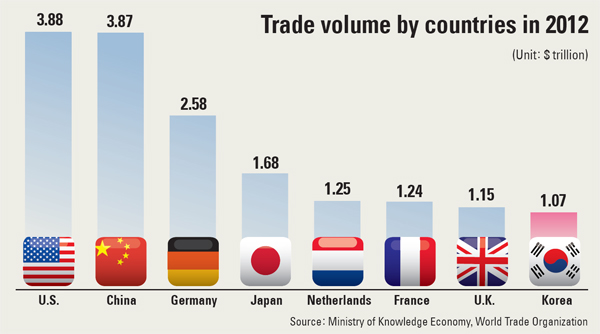 World Trade Organization statistics showed Korea had the eighth largest volume of trade last year, according to the Ministry of Knowledge Economy, moving up from its early position at ninth place.

The nation’s 1.68 trillion won ($1.54 billion) in trade pushed Italy down to the ninth position.

To reach 2 trillion won, the ministry said, more exports from small- and medium-size companies is needed.

“Although we have become a country with the world’s eighth-largest trade volume, the discrepancy of trade volume between large and small companies has intensified as small and medium companies (SMEs) have been not very successful in international trade,” the ministry said in a release.

“The number of Korea-made products that are the top sellers in the global market is also small compared to other countries,” said the ministry.

While China has 1,431 of the world’s top export items and Germany has 777, Korea has mere 61. Even Italy, the country Korea just pushed down the ladder, has 230 such products.

“We will provide R&D support to SMEs and help them develop their global trade connections,” said the ministry.

The government said Korea needs to expand its local industrial base for manufacturing exports as more companies move production overseas.

The U.S. had the world’s largest volume of trade but it is estimated that China will overtake it, according to the ministry based on WTO statistics.

China’s exports have grown 19.2 percent on average each year from 2000 until last year, while exports from the U.S. have increased by 5.9 percent yearly over the same period. Korea’s export showed average annual growth of 10.2 percent.

The top seven trading companies are the U.S., China, Germany, Japan, the Netherlands, France and the U.K.