Kuroda says 15 years of deflation will be ended

Kuroda says 15 years of deflation will be ended 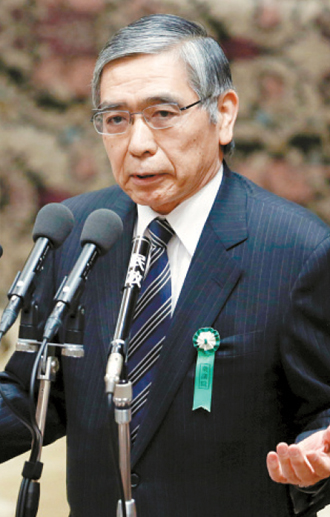 Haruhiko Kuroda said that the Bank of Japan will do whatever is needed to end 15 years of deflation should he be confirmed as governor and indicated that open-ended asset purchases could start sooner than next year.

“I would like to make my stance clear that we will do whatever we can do,” Kuroda, the president of the Asian Development Bank, said at a confirmation hearing in the parliament in Tokyo yesterday. The central bank hasn’t bought enough assets and should buy longer-term bonds, he said.

Prime Minister Shinzo Abe’s nomination of Kuroda has spurred forecasts for more aggressive easing to revive the world’s third-biggest economy after Masaaki Shirakawa exits the job on March 19. The opposition Democratic Party of Japan, the largest party in the upper house, has signaled it will back Kuroda, easing his passage through a split parliament.

Kuroda will need “to show that he’s radical at the central bank’s two meetings in April, otherwise markets will be very disappointed,” said Masamichi Adachi, senior economist at JPMorgan Securities Asia in Tokyo and a former BOJ official. He must convince policy board members “to change their mindset by 180 degrees,” Adachi said.

The “scale and scope” of the assets purchased by the central bank so far are not enough to achieve a 2 percent inflation target, Kuroda said. He said he would consider bringing forward open-ended purchases, due to start next year.

The Nikkei 225 Stock Average pared gains and the yen strengthened after Kuroda said that the BOJ should refrain from directly underwriting government debt - highlighting the potential for even expanded action by the central bank to disappoint some investors.

While meeting a 2 percent inflation target will not be easy, Kuroda is confident that the BOJ can do it, he told the lawmakers. He added that a two-year time frame is the global standard for such goals.

Nomura Holdings and Mizuho Securities say more easing could come as soon as the first policy meeting under the new BOJ leadership, scheduled for April 3-4.

Ending deflation will be good for the global economy, Kuroda said, adding that Japan’s easing is not aimed at weakening the yen - a restatement of official comments aimed at easing global concern over the currency’s decline of about 12 percent against the dollar in three months.

Kuroda said previously that falling prices exacerbate real debt burdens, and give an incentive to companies and households to postpone spending. Consumer prices excluding fresh food fell 0.2 percent in January. The price gauge hasn’t advanced 2 percent - the central bank’s new target - for any year since 1997, when a national sales tax was increased.

“Further easing policies are needed,” he said today. “However, the policy board will decide on the specifics of doing this based on market conditions and economic trends.”

He said that the central bank shouldn’t “buy bonds directly or monetize debt.”