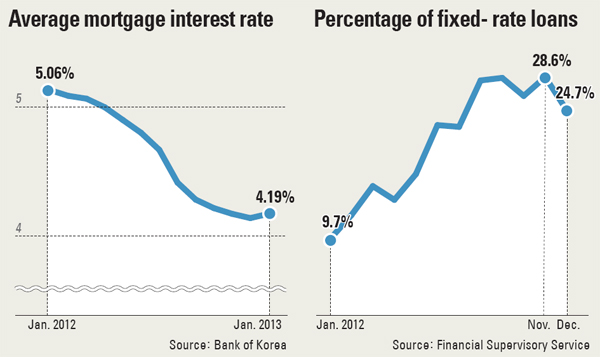 Had he opted for a variable interest rate that is adjusted every six months, he could have saved 1.2 million won this year because a 4.1 percent interest rate would have been applied in January.

Kang said he was interested in a variable rate, but the bank official persuaded him to go with a fixed rate.

“Because the economy had hit the bottom and there is a higher chance of the interest rate going up, it is better to take out a loan on fixed rate to pay less interest,” he said the bank official told him at the time.

“I want to change the rate to a variable one, but I can’t do that, either, because I [would have to pay a] fee,” said Kang. It could be as much as 1.5 percent for a loan taken out in the past three years.

Because banks and financial bodies including the Financial Services Commission (FSC) and Financial Supervisory Service (FSS) recommended the fixed-rate option, many borrowers are in the same situation as Kang.

According to the Bank of Korea last week, the interest rate on mortgage loans averaged 4.19 percent in January, 0.87 percentage point lower than in January 2011.

Fixed-rate loans accounted for 9.7 percent of mortgages taken out in January 2012 and 24.7 percent of loans in December.

The FSC and FSS urged banks to make more fixed-rate loans, targeting a 30 percent share by 2016.

It also eliminated the change fee for variable-rate borrowers who wanted to convert their mortgages to a fixed rate.

However, the Bank of Korea lowered the benchmark interest rate in July and October, and the interest on variable-rate mortgages followed suit. And many experts predict the central bank will lower the rate further.

Consumer groups blame the government for a policy mistake that has cost borrowers money.

“Interest rates were decreasing last year due to quantitative easing in the United States and Europe, but Korea’s financial bodies kept to the policy of encouraging the fixed rate,” said Cho Nam-hee, head of the Financial Consumer Agency.

“As a result, consumers received [financial] damages for not getting a variable interest rate, while banks that granted large sums in loans on a fixed rate rake in profits.”

Although borrowers on a fixed interest rate can enjoy advantages when the interest rate goes up as the economy recovers, experts say it was problematic that consumers were prodded to make a certain choice in the first place.

“Consumers should be able to make a decision based on their free will.”