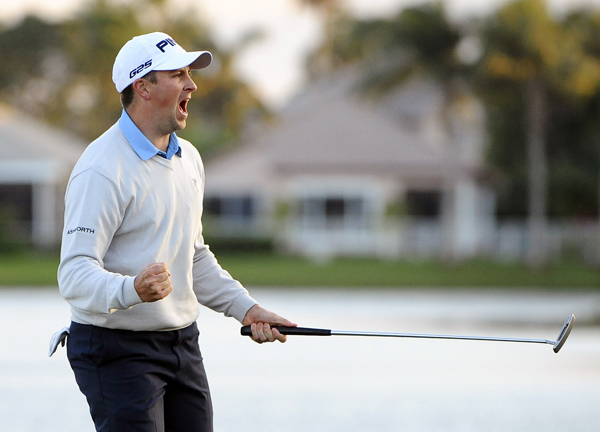 Michael Thompson of the U.S. reacts as he sinks his putt for birdie on the 18th hole to win the Honda Classic golf tournament in Palm Beach Gardens, Florida, Sunday. [REUTERS/NEWSIS]

The reality was much different Sunday in the Honda Classic.

He had a one-shot lead as he stood in the 18th fairway, some 240 yards from the flag with trouble in the way in the shape of large lake. The motto from his golf team at Alabama was to “finish strong,” and Thompson did just that.

Instead of laying up, he drilled a 5-wood into the bunker left of the green, setting up a simple sand shot and a birdie he didn’t even need. He closed with a one-under 69, one of only five rounds under par on a punishing day at PGA National to finally become a PGA Tour winner.

“That for me kind of sealed the deal,” Thompson said. “It allowed me to walk up the fairway and enjoy the experience, see the crowd and .?.?. just finish strong.”

The start wasn’t bad, either.

Thompson holed a 50-foot eagle putt on the third hole, relied on a superb short game around the toughest part of the golf course to build a four-shot lead, and hung on for a two-shot win over Geoff Ogilvy that takes him places he always wanted to be.

He gets into his first World Golf Championship next week at Doral, and qualifies for two more WGCs this year at Firestone and in Shanghai. He’s in the PGA Championship, gets to start next year in Hawaii and earned a two-year exemption on the PGA Tour.

And to think just two weeks ago he was so down after a 78-80 performance at Riviera that he wondered if he would ever make another cut.

“This week was magical,” Thompson said. “Just had a groove and kept feeling it.”

It turned out to be a big week for Ogilvy, too.

The former U.S. Open champion missed his past four cuts and had plunged to No. 79 in the world ranking. He already missed the Match Play Championship and was ready to miss another WGC next week at Doral until putting together four solid rounds.

He chipped in for birdie behind the 16th green and two-putted for birdie on the 18th for a 69 to finish alone in second, moving him up to No. 47 to get into Doral.

“I kind of penciled in a week off,” Ogilvy said. “So it’s nice, and it gets me back in the mix for the Masters.”

Luke Guthrie, tied with Thompson for the 54-hole lead, fell behind with a bogey on the second hole and closed with a 73 to finish third.

Tiger Woods was never in the picture. He started the final round eight shots behind, and whatever hopes he had of a rally ended on the sixth hole when he hit his drive so far to the right that the ball was never found.

Woods took double bogey, and only an eagle on the final hole kept the damage to a minimum. He closed with a 74 - his first time since the Masters last year that he failed to break par in any round of a 72-hole tournament - and tied for 37th.