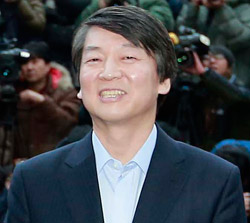 The return of Ahn Cheol-soo, the former presidential frontrunner who was a strong rival to President Park Geun-hye, is shaking up politics once again, particularly puzzling the main opposition Democratic United Party, which has remained dysfunctional since its defeat last year.

The 41-year-old liberal icon has declared his candidacy to run in the April by-election on Sunday, filling the vacancy of Roh Hoe-chan, a Progressive Justice Party co-chairman who lost his seat for being convicted of violation of a communication law.

Song Ho-chang, Ahn’s former campaign manager, said at a press meeting on Sunday that Ahn has decided to run for a National Assembly seat to “realize new politics.”

Thus far, Ahn has reportedly maintained his human network with roughly 2,000 members, mostly professors, civic activists and experts. Those forum members are expected to become political advisors for Ahn in the upcoming race. Most of the core members who worked for Ahn’s presidential campaign are also reportedly coming back, in order to help his debut in the legislature.

Political observers say those former campaign managers have also maintained their contact with Ahn while he was in the United States.

In the April by-election, a total of three seats will be filled - Nowon C District, northeastern Seoul, Yeongdo of Busan and Buyeo of South Chungcheong. Nowon C District and Yeongdo are strongholds for liberals, while Buyeo is a conservative area.

So far, in every legislative election in the Nowon C District, voters have elected liberals for their geographic representative, except in the 18th National Assembly election. Roh, an iconic labor activist, lost his seat on Feb. 14 when a local court fined him on charges of revealing a secret dialogue between a former JoongAng Ilbo president and a Samsung official.

In the dialogue, they discussed bribing a then-presidential candidate and seven prosecutors to exert their influence ahead of the presidential election in 1997. Liberal politicians say the loss of Roh’s seat is absurd, and they argue that the region must be filled with a liberal candidate as influential as Roh. Therefore, Ahn’s candidacy for the district is not exactly welcomed by liberals.

The first to publicly oppose it was Roh. In interviews with several radio programs yesterday, Roh said Ahn is just like “a conglomerate running a bakery in a small town.”

“He has never mentioned his intention to run in the Nowon C District and never asked my favor,” Roh said in an interview with MBC Radio yesterday. “A father of a poor family should go out somewhere to make money, not steal bread from his family members at home.”

It was contradictory to the press meeting on Sunday. Song, Ahn’s spokesman, told reporters that they “showed their loyalty to Roh Hoe-chan by making a phone call,” implying Roh has recognized Ahn’s running. Roh said it is true that he had a phone conversation with Ahn, but that they just exchanged greetings with each other. So far, among the Progressive Justice Party members and other liberal parties, expectations were high that Roh’s wife, Kim Ji-seon, a renowned labor activist and a feminist, would fill the post of her husband.

The main opposition DUP did not show an enthusiasm toward that, either. Kim Hyeon, a spokesman for the DUP, said in a brief press release on Sunday, without a press meeting, that “Ahn has promised to continue his own new politics, and we assume he intends to keep that promise.”

You Seung-hee, a DUP lawmaker, said in a radio interview yesterday that she hopes Ahn would run in Yeongdo, Busan, rather than in the district, where high-profile Saenuri politician, Kim Moo-sung, who is also a close aide to President Park Geun-hye, has declared his candidacy.

Beside Kim, no other candidate has come out yet. “In my opinion, I think it would have been better for Ahn to run in Busan,” she said.

In Korea, a candidate can run for any region, regardless of residency or property ownership. Critics say if a DUP candidate and Ahn compete, liberal votes will be split, resulting in a victory for a Saenuri candidate.

Ahn has not said he would join the DUP after the by-election. Seoul Mayor Park Won-soon, who was endorsed by Ahn, became a member of the DUP after he won the Oct. 26 Seoul Mayoral by-election in 2011. Another concern for the DUP is a scenario where Ahn creates a new political party, which would absorb many DUP supporters.

As of yesterday, the Saenuri did not expressed its official position on Ahn’s return. But Lee Cheol-woo, a spokesman for Saenuri, told reporters on Sunday that he “is concerned Ahn will cause confusion through a candidacy merger with the DUP.”