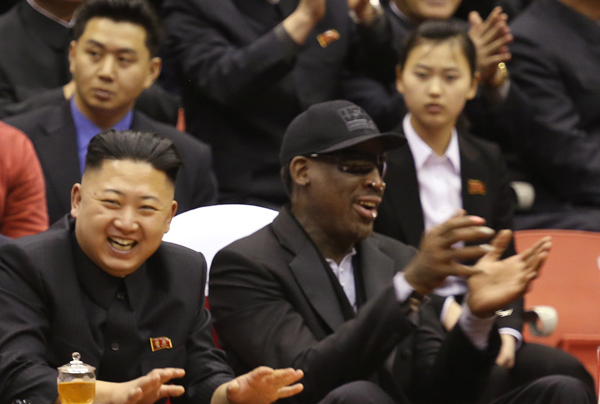 WASHINGTON - North Korea’s young leader has riled the U.S. with recent nuclear tests, but Kim Jong-un doesn’t really want war with the superpower, just a call from President Barack Obama to chat about their shared love of basketball, according to unlikely diplomat Dennis Rodman, the ex-pro basketball star just back from an improbable visit to the reclusive communist country.

“He asked me to give Obama something to say and do one thing. He wants Obama to do one thing, call him,” said Rodman, who called the authoritarian leader an “awesome guy” during his trip. The State Department criticized North Korea last week for “wining and dining” Rodman while its own people go hungry.

Yet in January, after the UN Security Council voted to condemn the North’s successful rocket launch in December and expand penalties against Kim’s government, his National Defense Commission said in a statement that “settling accounts with the U.S. needs to be done with force, not with words.” The statement also promised “a new phase of the anti-U.S. struggle that has lasted century after century.”

North Korea and the U.S. fought on opposite sides of the three-year Korean War, which ended in a truce in 1953. The foes technically remain at war. They never signed a peace treaty and do not have diplomatic relations.

Rodman was the highest-profile American to meet Kim since Kim inherited power from his father Kim Jong-il in 2011. He traveled to the secretive state with several members of the Harlem Globetrotters team for a new HBO series produced by New York-based VICE television.

The visit took place amid rising tensions between the countries.

North Korea conducted an underground nuclear test two weeks ago, making clear the provocative act was a warning to the United States to drop what it considers a “hostile” policy toward the North.

Rodman said he was aware of North Korea’s human rights record, which the State Department has characterized as one of the worst in the world, but said he wasn’t apologizing for Kim.

“He’s a good guy to me,” Rodman said, adding, that “as a person to person, he’s my friend. I don’t condone what he does.”

The State Department on Friday distanced itself from Rodman’s visit and his praise for Kim, saying he doesn’t represent the United States.

“The North Korean regime has a horrific human rights record, quite possibly the worst human rights situation in the world,” spokesman Patrick Ventrell told reporters in Washington. He accused the regime of depriving their people of food, shelter, water and maintaining prison gulags.

Basketball is popular in North Korea, and Thursday’s exhibition game with two Americans playing on each team alongside North Koreans ended in a 110-110 tie. Following the game Kim threw an “epic feast” for the group, plying them with food and drinks and making round after round of toasts.

Rodman’s trip was the second attention-grabbing American visit this year to North Korea. Google’s executive chairman, Eric Schmidt, made a four-day trip in January, but did not meet Kim.

Rodman said he planned to go back to North Korea to “find out more what’s really going on.”