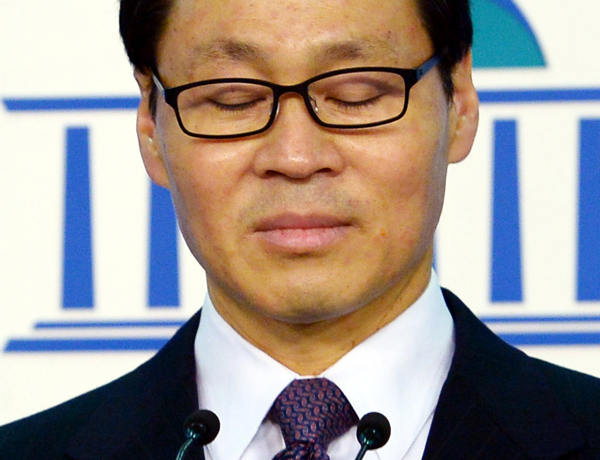 Kim Jeong-hun, the telecom entrepreneur from the United States handpicked by President Park Geun-hye to head her Ministry of Future Planning and Science, said he was walking away from the job yesterday because he’s frustrated with Korean politics.

Kim, a Korean-American who served as president of Bell Labs and chief strategy officer of Alcatel-Lucent, held a press conference at the National Assembly yesterday morning and announced his decision to abandon his nomination.

“It is a critical juncture that will decide the country’s fate and the people’s future,” Kim said.

“As I watch the National Assembly refusing to budge and the chaos surrounding the Ministry of Future Planning and Science at this moment, my dream to devote myself to my homeland shattered into pieces.”

Kim’s announcement was made an hour before a televised speech by Park to talk about the legislative deadlock over her government restructuring plan.

Although Kim won’t be minister, Park made clear yesterday she will push forward with the new ministry, which is a centerpiece of the restructuring.

“It was hard for me to witness an opposition party that refuses the president’s order and such political chaos,” Kim said. “I could not hold onto my feeling to devote myself to the fatherland. I will desist from committing myself.”

Kim said he still believes in Park’s plan to build a creative economy by bringing together science, information, communication and technology in the new ministry.

Asked if he will stay in Korea and in politics, Kim shook his head vigorously.

Park addressed Kim’s stepping down during her speech to the nation and expressed her frustration.

“I made such efforts to persuade him to join our government to develop a future growth engine and a creative economy,” Park said. “But he expressed his intention to resign in frustration over our political realities. It is extremely regretful.”

Stressing that human resources are the most important asset Korea has to improve its competitiveness, Park echoed the promise she made in her inauguration address that talented Koreans overseas should be recruited to contribute to the development of their homeland.

“To this end, we must create a political environment in which talent can return to Korea and utilize their abilities,” Park said. “We must not let down the talented people who came back to Korea to serve their fatherland.”

Shocked by Kim’s abrupt announcement, the ruling Saenuri Party begged him to reconsider.

“Korea is a land of many obstacles,” Saenuri Chairman Hwang Woo-yea said yesterday.

“It will be meaningful to overcome the obstacles, and it is not appropriate for him to turn away from them. The people have high expectations, and the government restructuring bill will soon be resolved, so we ask Kim to reconsider his decision.”

“Is he saying that he is a precious American citizen but was willing to take some loss because Korea is his fatherland?” Lee asked. “But now he’s decided to retract it because things are not going smoothly? His childish attitude is laughable.”

Lee said everyone in Korea is devoting themselves to the country, and the Korean people are hurt by Kim’s arrogance.

Lee also said it was uncertain that Kim would be confirmed by the National Assembly because of his dual citizenship, alleged connection to the Central Intelligence Agency, his wife’s alleged operation of a luxury bar and other real estate speculation by him and his family.

“If there was a real reason for him to give up the post, he should have stated it clearly and sought the public’s understanding,” Lee said. “It’s bitter to see him use the confrontation between the ruling and opposition parties as an exit strategy.”