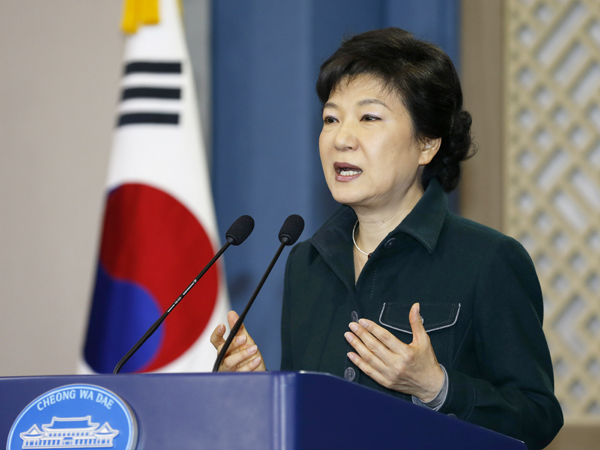 President Park Geun-hye delivers an address to the people yesterday at the Blue House to press the main opposition Democratic United Party to approve a package of bills to restructure the government as soon as possible. [AP/NEWSIS]

President Park Geun-hye and the main opposition party went head to head yesterday over the deadlocked plan to create a new ministry to integrate the telecommunication and media industries.

In an address to the nation yesterday morning, Park vowed not to alter her plan and pressed the Democratic United Party to approve a package of bills to restructure the government as soon as possible.

“The fundamental problem,” Moon said, “is her attempt to make the legislature her handmaiden.”

Yesterday was the eighth day of Park’s presidency, but her government remained without ministers due to the legislative deadlock. In the address, which was televised live, Park apologized to the people for the administrative vacuum.

“This is a situation unprecedented since the establishment of constitutional rule,” Park said.

A solemn-faced Park put the blame on the DUP and pressed its leaders to accept her invitation for a talk.

“The government restructuring plans were created after long deliberation and meticulous review,” Park said. “Aside from creating a new growth engine to strengthen the nation’s competitiveness and improving people’s lives by creating good quality jobs, it harbors no ulterior political motive.”

Park denied opposition lawmakers’ claim that the purpose of her plan is to control the country’s broadcasting industry. “I have no intention to do so,” she said. “And it is also legally impossible. I can make a promise before the nation.”

The ruling and opposition parties are fighting over Park’s plan to create a Ministry of Future Planning and Science to integrate information, communication and technology policies. The DUP particularly opposes the idea of giving the ministry oversight of the broadcasting industry, arguing that it will undermine the integrity of broadcasters.

Shortly before Park’s press conference, Kim Jeong-hun, her nominee to head the new ministry and a former president of Bell Labs and chief strategy officer of Alcatel-Lucent, announced his decision to give up the post. Park lamented his quitting in her speech.

Park asked the leadership of the DUP to accept her proposal to meet with the ruling party to talk about the legislative deadlock, but she was clear she had no intention to compromise.

“As president of the Republic of Korea,” Park said, “it is my dire feeling that I cannot give ground on this issue for the sake of the nation’s future.”

Park asked the public to support her in pressuring the DUP to accept her plan.

“I ask the people to join forces so that the government restructuring bills will be passed by the legislature as soon as possible,” she said. 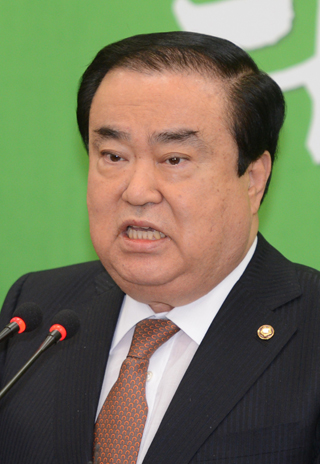 Shortly after Park’s address, the DUP’s interim head held a press conference to refute the president.

“Government restructuring is a matter of revising the Government Organization Act,” Moon said. “So it’s a matter that must be decided through an agreement between the ruling and opposition parties. But the Blue House’s recent behavior ignores not only the National Assembly and the opposition party but also the ruling party.”

Moon said Park’s approach violates the separation of legislative, administrative and judicial powers. “No matter how desperate she is and whether it is her philosophy or not, revising a law requires the National Assembly’s discussion and the people’s consensus,” Moon said. “It can’t be done by a president pressuring the opposition party.”

Criticizing Park for insisting on her plan instead of giving the ruling Saenuri Party authority to negotiate with the DUP, Moon said, “It’s like the ruling and opposition parties are playing a chess game, and the president gives an order to upset the chessboard.”

Moon said he won’t go to a meeting with the president that was little more than a “photo op.”

“If the president is willing to fully recognize the DUP as a partner in running the country and discuss a national agenda, I am more than happy to go [for a summit] at any time.”

Moon also said the DUP does not entirely disagree with Park’s idea of using the future planning ministry as a new growth engine for the economy, but that Park was forcing the opposition party to accept her plan without any changes.

“If she truly wants politics to serve the people, respect the National Assembly’s legislative rights,” Moon said. “Park must declare that she won’t insist on her original plan and will accept the legislature’s compromise. She must remember that is the only way to make up for the shortcomings of a delayed launch of her government.”

“We will continue the negotiations today,” Park said. “We sincerely hope that she would consider our offer.”