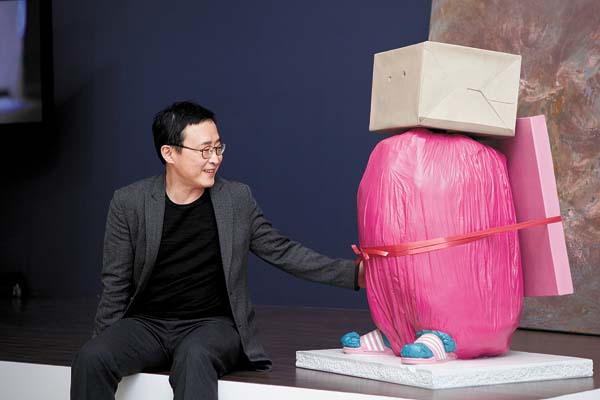 Gimhongsok poses with “Self-Statue” (2012), made of garbage rolling around his studio including a plastic bag and paper boxes that were later cast in resin. Provided by the gallery

Now in front of Plateau gallery in central Seoul is a sculpture of a dog. It resembles the famous “Balloon Dog” by American neo-pop artist Jeff Koons, but unlike his expensive shiny creation, this one looks like it was made with black garbage bags, though in fact, the bags have been cast in bronze.

In English, the piece is called “Canine Construction”(2009), but its Korean title, which literally translates into “A form like a dog,” is funnier because “like a dog” is often used as a curse.

The piece by playful artist Gimhongsok is a good introduction to his solo show, which starts tomorrow at the gallery.

“One of issues I raise in this exhibition is translation,” the artist told reporters in a preview on Monday. “Modernization in Korea’s history was a kind of translation of that from Western countries. I think even translation can be autonomous and original.”

His “translation” has some satirical tones, as seen in “Canine Construction” and “A Study on Slanted and Hyperbolic Constitution-LOVE” (2011).

The sculpture shows the four letters “LOVE” written out with stacked paper boxes and an old mattress looking like a parody of American artist Robert Indiana’s iconic “LOVE” sculpture.

“The work willingly betrays the solidity and beauty of the original,” said Ahn So-yeon, chief curator and deputy director of Plateau.

She pointed out that Gimhongsok often uses waste that remains after the production and delivery of sculptures and installations such as boxes, plastic bags and boards.

“The artist rather foregrounds the shabbiness of the material as the central emphasis, reflecting the dynamics between the center and margin, as well as the subject and the object that is consistently examined in his oeuvre,” she said.

But here is another “betrayal.” The final sculpture is not made entirely of boxes and mattress but cast in resin - just as the plastic bags of “Canine Construction” are cast in bronze. In the same way, the sculptures in the “People Constructive” series, which look like parodies of minimalist sculptures of boxes and sticks, are also actually cast in bronze or made of stainless steel.

The artist said in his Korean-English “proposal” about the exhibition that such deception could potentially be “unethical.”

“My decision as an artist to turn subsidiary agents [garbage in his studio] into an independent main agent [an art work] has given the work mutated form [cast in resin], for which I feel guilty,” he said. 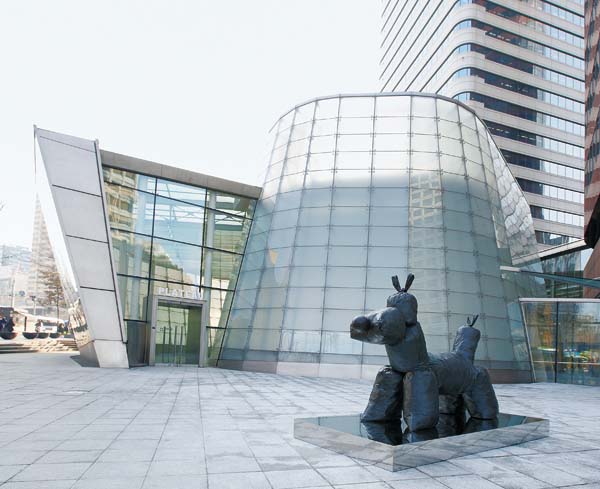 “Canine Construction” (2009) is installed in front of Plateau gallery in central Seoul as part of Gimhongsok’s solo show that starts tomorrow. It is made of black garbage bags cast in bronze.

However, “the collision between the ethical attitude evinced in the original selection of materials and political statement generated by those materials’ transformation brings me great pleasure,” he added.

Gimhongsok must also contend with the “hidden labor” of people who participated in the production and delivery of the art but stand in the shadows behind the artist’s name, he told the press.

This is related with his long-standing interest in “the dynamics between the center and margin, as well as the subject and the object.”

“Since Marcel Duchamp, labor has disappeared from art,” Ahn explained. French artist Duchamp (1887-1968) found a urinal, signed it and brought it to an exhibition in 1917, declaring it was art. It was the start of conceptual art, in which the artist’s “concept” is important and his artistic skill is not.
“Since then, few care about whether artists have made their works in person,” she said. “But is it right that we don’t care about the labor of the assistants employed by the artists? Since they were paid, that’s it? It is the question of Gimhongsok.”

The issue is the focus of the highlight of the exhibition “Good Critique, Bad Critique, Strange Critique” (2013).

It is a collaborative project by Gimhongsok and three art critics - Kang Seok-ho. Seo Hyun-seok and Yoo Jin-sang.

The work is presented as a performance, video and text about two works by Gimhongsok - “Self-Statue,” also made of waste but cast in resin, and a washed-out painting titled “MOP-121107.”

“By implementing critique as part of the work itself, the artist seems to delegate his position as the ‘author’ to others,” Ahn said. “At the same time, however, he offers financial compensation to the critics for their contribution and therefore reveals the process of social ‘consensus’ which determines the artistic rights in contemporary art practice.”