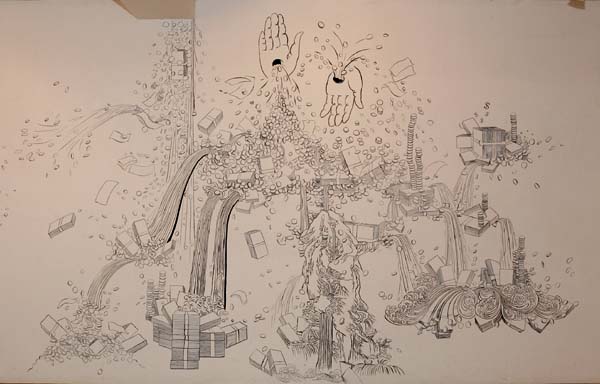 Nam June Paik Art Center is introducing the artistic descendants of the gallery’s namesake, a Korean-American video art pioneer who passed away in 2006.

The permanent exhibition “Gentle Disturbance - Talking Paik” remains on the first floor and explores the works of Nam June Paik. Up on the second floor, the works explore the legacy of Paik’s influence through the works of artists such as Mixrice, Kim Beom, Ana Hu?man and Francis Alys.

The exhibition, “Tireless Refrain,” examines a series of political and social issues through works in a variety of mediums.

“Through continuous repetitions and remembrances, the artists hoped deep social problems could be exposed above the surface,” said Ahn So-hyun, the exhibition’s curator. 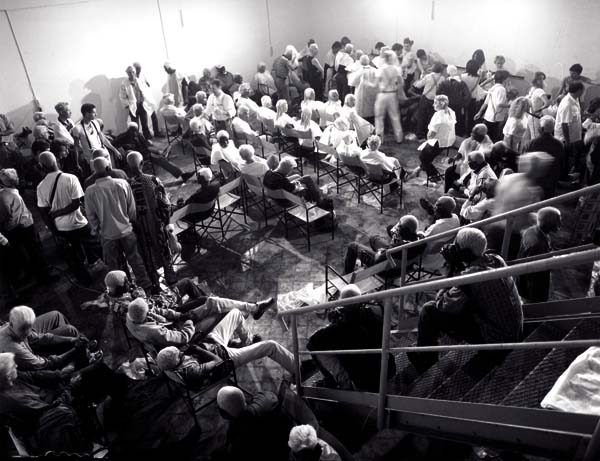 133 people who got paid to dye their hair, an experiment held by Spanish artist Santiago Sierra. Provided by Nam June Paik Art Center

As you go up the hall, the first section features the works of Mixrice, the Korean duo of Cho Ji-eun and Yang Chul-mo. The pair has been focusing on migration for more than ten years, capturing small moments such as a miniature of a construction project being worked on by migrant laborers.

In the acrylic piece “Pokpo” (Waterfall), what seems to be a waterfall from a distance transforms on closer inspection into a spray of coins that represent the capitalist pursuits of society.

“This piece is the one the visitors love the most,” said Ahn. In the video, an actor starts to scream as he paints a canvas yellow over the course of 30 minutes. Although the scene is funny on the surface, Kim is implying the arbitrariness of information in the education, media and art industries.

Ana Husman, a Croatian artist, is showing an experimental film called “Lunch.” As it goes through the intricate etiquette to follow when greeting guests, it draws laughter with the overly detailed explanations.

From who to invite to what to talk about while you’re eating, the awkward dialogue and gestures reveal her satire of social customs.

“It’s a short video which takes only about 16 minutes, but all the moments are actually a combination of an excessive number of photos, so it really took her some long, work,” said Ahn.

Belgian artist Francis Alys explores historical issues of the Middle East with his documentary “Green Line.” The line refers to the interim demarcation lines set out in 1949 between Israel and its neighbors after the 1948 Arab-Israeli War, which led to large-scale conflicts along the borders. Alys walks along the lines pouring green paint. As the video continues, he interviews 11 people with perspectives on the region’s troubled history. The story is often silent as it unravels, but pushes forward with strong action.

“Many foreign artists whose works are displayed here are already well-known worldwide,” said Ahn, “and I hope Korean artists can also gain popularity through this opportunity.”

The exhibition runs until June 16. Hours are from 10 a.m. to 8 p.m. daily; the gallery is closed on the second and fourth Mondays of the month. Admission is 4,000 won ($3.71) for adults and 2,000 won for students. Take bus No. 5000 or 5005 from Seoul Station or Sejong Center in central Seoul and get off at the Singal five-way intersection in Yongin, Gyeonggi.