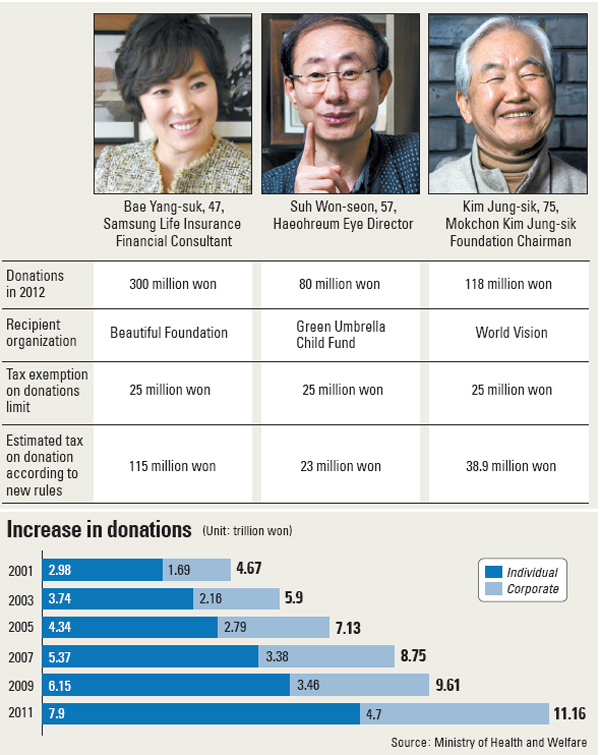 Due to a revision in a tax exemption law, those who donate a large sum of money for charitable causes can see more than a third of their donations end up being taxed.

Bae Yang-sook, 47, a Samsung Life Insurance financial consultant, donated 300 million won ($276,046) to various philanthropic foundations last year, including the Beautiful Foundation, and would have liked to do so again this year.

But since the tax exemption on donations is capped at 25 million won under current regulations, her donation would be hit with 115 million won in taxes, more than a third of her donated amount in 2012.

Under the revision in the Restriction of Tax Reduction and Exemption Act, starting from January, total tax deductions in seven areas, including education, insurance and medical fees, as well as donations were capped at 25 million won. Donations that exceed that amount will no longer be exempt from taxation.

For the past 20 years, Suh Won-seon, director of the ophthalmology clinic Haeohreum Eye, has been an avid donor for good causes, increasing the amount of his donations each year.

His annual income is 400 million won, so a total of 80 million won in donations should be deducted from taxes, as was the case in previous years.

But this year, he would be slapped with an additional 22.99 million won in taxes for the donations.

“There is a big problem [with the tax reduction restriction act],” said Suh. “I do not understand the concept of treating donations as income.”

“It is not right to scrape up more taxes from those who are doing good deeds just because there are no funds to finance the welfare policies,” Kim said, referring to the new administration’s attempts to finance its new welfare policies such as expanded senior subsidies and medical insurance covering four major illnesses.

The Ministry of Strategy and Finance estimates that some 40,000 to 50,000 people will pay some 90 billion won in extra taxes from their donations following the new regulation on the cap on the donation amount which is exempt from taxation.

Over the last decade, donations, both from individuals and corporations, have increased drastically from a total of 4.67 trillion won in 2001 to 11.16 trillion won in 2011, according to the Ministry of Health and Welfare.

“For 40- to 50-year-olds with an annual salary of 100 million won, and a child in college or high school, those who donate just 5 percent of their income will be hit by the tax reduction restriction law,” said Cho Hye-gyu, a tax accountant at Hansol Accounting.

“Because the middle class calculates tax meticulously, donations will only decrease.”

Jeon Hyun-kyeong, a researcher with the Center on Philanthropy at the Beautiful Foundation, said, “The gain from the tax will be incomparable to the value of the donations.”

There is also concern that donors will flock to those organizations that are exempt from the new regulation, such as Community Chest of Korea or the Korean Red Cross.

Civilian organizations have also been vocal in demanding a revision to the law. Following much criticism, the Welfare Ministry requested an amendment to the law, and the regulation is currently undergoing revision at the National Assembly.

The amendment would exclude donations from the tax-deduction cap.

“In a U.S. style capitalistic nation like Korea, where the tax is low and also welfare benefits also small, donations are essential for the community,” said Cho Heung-sik, social welfare professor at Seoul National University.

“We have few large-sum individual donors, so we need to encourage voluntary donations, so it is not desirable to go in the other direction.

“The restriction on tax exemption act does not comply with policies to increase large donations.”