NH Financial happy to move ahead

NH Financial happy to move ahead 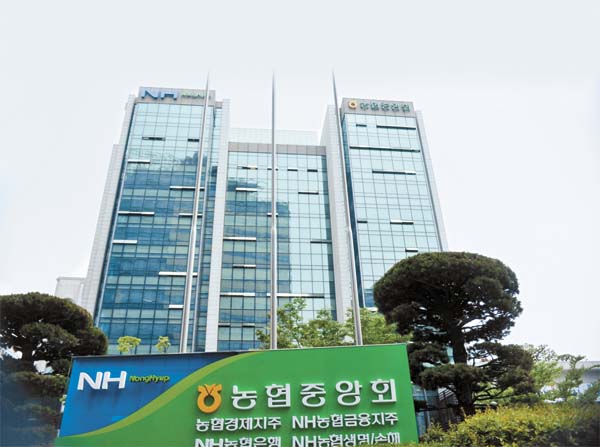 This month marks the first anniversary of the establishment of Nonghyup Financial Group.

A year ago, financial institutions were on the edge of their seats as the financial division of the agricultural cooperative Nonghyup spun off, signaling the birth of another competitor.

Splitting the retail and distribution business from the finance business was the first spinoff since Nonghyup was established in 1961.

Nonghyup Financial Group quickly became the nation’s fifth largest, with 240 trillion won ($220 billion) and over 1,170 branches, more than any other group.

A strength of Nonghyup Financial Group is that it has branches even in the most remote neighborhoods.

Additionally, under the financial holding company, there are seven affiliates, including the banking, life and nonlife insurance and brokerage units.

However, the past 12 months have not been easy, with Nonghyup Financial Group failing to meet expectations.

When launching the financial holding company, Nonghyup announced a vision of nearly doubling net profit to 420 trillion won with annual net profit of 3.8 trillion won and raising the return-on-equity from 4 percent to 11.6 percent by 2020.

Market experts have argued that although the unfavorable economy was to blame for the disappointing performance, a lack of expertise and failure to maximize synergies among affiliates, and a widespread network were also contributing factors.

Nonghyup as an agricultural cooperative has a long history in the retail and distribution industry. However, its financial unit is still considered at an elementary level compared to competitors.

In fact, Nonghyup Financial Group’s productivity per capita is estimated at 80 percent of that of other financial groups.

Nonghyup Financial Group also gets some blame for a premature launch, according to observers. It was too preoccupied meeting the deadline for its spinoff set by law that the financial group was not yet prepared to stand alone.

In fact, the financial group was established less than a year after NH Bank suffered a major server malfunction in April 2011.

And three months after the spinoff, its President Shin Choong-shik unexpectedly resigned.

Shin, who remains as NH Bank president, was believed to have been under immense pressure as head of the larger holding company. He spent most of his time not at the holding company’s chairman office but at the bank.

When he left the chairman position, Shin said he was stepping down to focus on enhancing the competitiveness of the bank. However, there were rumors he was pushed out the door.

The vacant spot went to Shin Dong-kyu, then head of the Korea Federation of Banks. But Shin’s appointment raised questions over possible political influence, since he was a close aide to then President Lee Myung-bak and also went to the same high school as Lee’s economic mentor Kang Man-soo.

With the rough first year behind it, the financial group is confident the situation will improve.

Shin on Monday unveiled this year’s goal of 1 trillion won in net profits during the first anniversary press conference.

He said he hopes to achieve the goal through innovation, which includes allocating the work force based on ability, while raising productivity by merging or abolishing underperforming branches.

“Since we established a stable management system last year, our target could be met through management innovation,” Shin told reporters.

In December, NH Bank received approval from the Vietnamese government to open an office in Hanoi. Last month, the bank also received the green light for an office in Beijing. Unlike branches, no commercial transactions are made at offices.

The most notable development is that it won approval in January to open its first overseas branch in New York. It will be the first time NH Bank has opened a branch where commercial transactions, including lending and deposits, is permitted.

The bank’s branch will start providing services in May. The bank has had an office in New York since December 2010.