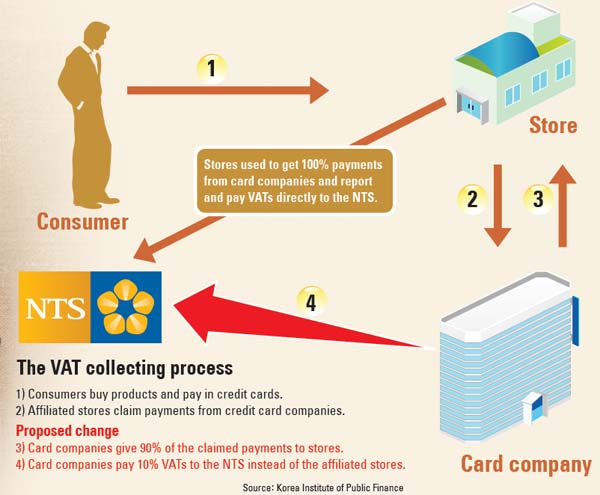 The Ministry of Strategy and Finance is pushing a new plan to prevent value added tax (VAT) evasion as part of the new government’s effort to raise revenues without increasing taxes.

At a symposium hosted yesterday by the Korea Institute of Public Finance (KIPF), a state-run think tank that focuses on tax policy, researchers put forth a plan that would require credit card companies, rather than their clients, to report and pay VAT.

The plan is expected to be included in the new administration’s tax reform bill scheduled to be introduced in September. The KIPF has been working on the plan in cooperation with Cho Won-dong, President Park Geun-hye’s top economic aide.

KIPF researcher Kim Jae-jin said the government would be able to increase tax revenue by as 5.3 trillion to 7.1 trillion won ($6.5 billion) annually by mandating that card companies report and pay the total amount of VAT collected in credit transactions to the National Tax Service (NTS). 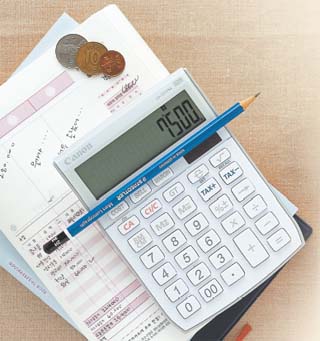 It is modeled on the so-called “reverse charge” system introduced in Britain in 2007 to enhance transparency in VAT payments involving business-to-business transactions.

Korea’s VAT rate currently stands at 10 percent and is included in the final price of all products and services.

According to Kim, about 11 trillion won in VAT revenue goes uncollected each year.

Under the current system, when a consumer uses a credit card, the store claims the money from the credit card company. Then the store reports sales and VAT due to the NTS. However, some stores and businesses manipulate sales to avoid reporting the 10 percent tax.

The new plan requires credit card companies to pay 90 percent of the claimed money and report the VAT to the tax authority.

According to the NTS, total VAT revenue stood at 55.7 trillion won in 2012, 1.1 trillion won lower than government projections.

“In order to close the leakage in VAT collection, we should make whomever is paying the tax more transparent,” Kim said.

The NTS said there are increasing cases of VAT evasion cases at paper companies set up to dodge the tax.

Resource companies have ample chances to evading the VAT by exploiting tax-free materials like copper, iron and some kinds of oil. From 2003 to 2005, gold wholesalers were caught dodging around 840 billion won worth of VATs, the NTS said.

The tax authority believes there will be more such cases among self-employed people and small business owners, even though the VAT rate is less for those with less than 48 million won in annual sales.

“It would be impossible to find all VAT evaders, but adopting the reverse charge system would have a positive effect on discovering hidden tax sources,” Kim said.

There has been discussion about raising the VAT rate from the current 10 percent; the average VAT rate of OECD countries is 22 percent .

Since the VAT was introduced in Korea in 1977, it has never been raised. The rate was proposed at 13 percent at the time, but lowered to the current level due to stiff public opposition.

Denmark and Sweden set their rates at 25 percent, while Britain has its at 20 percent, France 19.6 percent and Germany 19 percent, according to the KIPF.