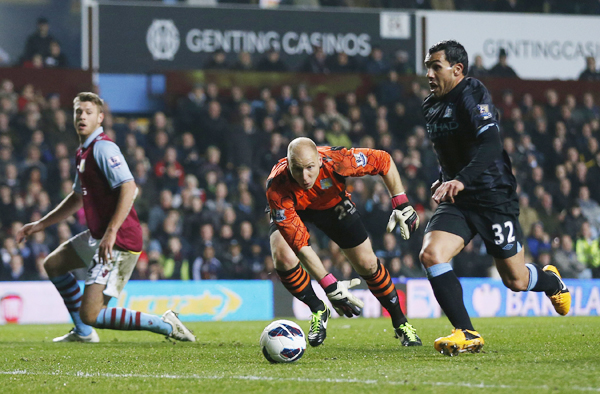 The Argentine produced a cool finish to punish a defensive mistake just before halftime and though not playing at full throttle City were rarely troubled as they claimed a victory that left Villa in the bottom three.

Manchester United, who faced Real Madrid in the Champions League last 16 second leg yesterday, still look unstoppable in pursuit of a 20th English title with 71 points. With 10 games left to play City have 59 points and Tottenham Hotspur are third on 54.

“We have to keep on winning and see. This is football, nothing is impossible,” City boss Roberto Mancini, whose side claimed the title with virtually the last kick of last season after clawing back eight points on United, told Sky Sports.

“We know it will be difficult but we will keep on trying. For us it was important to stay 12 points behind United and for us the championship is not over.”

Villa, needing a point to get out of the relegation zone above Wigan Athletic, controlled the opening 20 minutes and nearly went ahead when Christian Benteke’s goalbound header was booted off the line by Tevez on the post.

City gradually settled into their rhythm and Pablo Zabaleta was unlucky not to give them the lead after 36 minutes when his shot was finger-tipped against the inside of the post by Villa keeper Brad Guzan.

Villa looked like reaching halftime unscathed, but a moment of madness from defender Ciaran Clark undermined a hard-working first-half display by the hosts.

Attempting a fancy turn, he was dispossessed by Edin Dzeko, and the Bosnian squared for Tevez who danced past Guzan before slotting into the net despite Clark’s attempts to get back on the line.

Replays suggested Dzeko may have fouled Clark while robbing him of the ball, although Villa manager Paul Lambert laid the blame squarely on his young defender.

“I did not think it was a foul,” said Lambert, whose side have won only one of their last 10 league games.

“When you are a defender and you are near enough last man, you do not take any chances.” Reuters