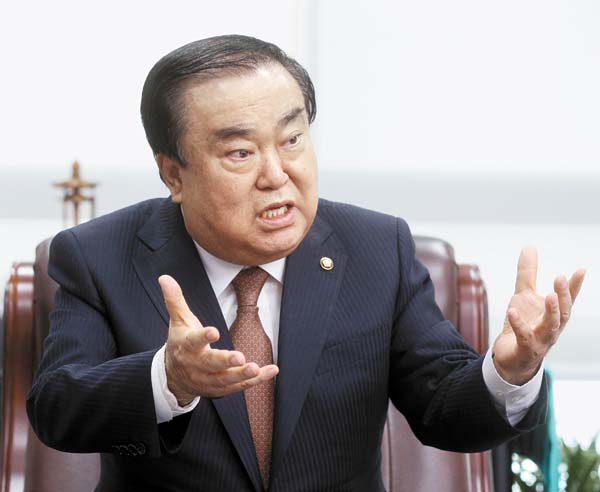 Moon Hee-sang, interim leader of the main opposition Democratic United Party, has urged President Park Geun-hye to better communicate with her aides and other politicians to avoid isolation.

“When Park was a fellow lawmaker, I came to think that she was gentle in appearance but tough in spirit, and I still think that’s true,” Moon said in an interview with JoongAng Sunday last week.

“I hope she becomes a successful president. But if she does not communicate as president and become a princess on a remote island, it will be a path to collapse.”

Moon, a five-term lawmaker and a law graduate of Seoul National University who took his post after the December presidential election, is the seventh leader of the DUP since the party’s founding in December 2011.

On average, each party head’s term was about two months. “[Frequent leadership change] is because the party was defeated in the by-election, general election and presidential election,” he said.

In response to concerns that there are no suitable heads to lead the DUP, Moon said, “Former U.S. presidents like Bill Clinton and Jimmy Carter were state governors. We also have eight mayors and governors.” Seoul Mayor Park Won-soon, Incheon Mayor Song Young-gil and South Chungcheong Gov. Ahn Hee-jung all have the potential to become good leaders, he said.

The 68-year-old also made clear that the DUP isn’t a party that neglects security.

“We’re not a party that poorly manages the country’s security issues,” Moon noted, pointing to a recent DUP meeting on Yeonpyeong Island, which was shelled by the North in 2010.

“Only the Kim Dae-jung and Roh Moo-hyun administrations responded to the North’s military provocations including the intrusion into the South’s side of the tense maritime border, the Northern Limit Line,” he added.

Moon first entered politics in 1988 as one of the founders of the Party for Peace and Democracy. Since 1992, he has been consecutively elected as a National Assembly lawmaker. During the Kim Dae-jung Blue House, he was the head of the State Affairs Committee, while during the Roh Moo-hyun administration, he was the chief presidential secretary. He is also a former vice speaker of the National Assembly and former head of the Uri Party, predecessor of the DUP.

Q. Have you met President Park Geun-hye since the Dec. 19 presidential election?

A. I met her when there was a trilateral meeting [with the heads of the ruling and opposition parties] on Feb. 7 after North Korea’s nuclear test. Only 1 percent of what we discussed has been disclosed to the public. The remaining 99 percent was mainly about the importance of communication. The first target of communication should be the president’s aides, then the ruling and opposition parties. I told her that in particular, there should be continuous talks with the opposition party. This is important and symbolic because if she holds discussions with the opposition party, it means she’s sharing thoughts with the 48 percent who did not vote for her in the election. I also told her that the strained relationship between South Korea and North Korea should be improved through dialogue and conversation. To this, she remained silent.

What do you personally think about Park’s method of personnel appointments?

Officials appointed in the early stages of an administration have an influence on the whole five years.

Having this in mind, Park’s way of appointing officials could bring big trouble, if it goes on like this. Huh Tae-yeol, Park’s chief of staff, should begin his role as the head of the personnel affairs committee and screen her appointments.

There is a limit to choosing officials by reading old notebooks and saying, “I saw someone on television and he or she seems to be a good fit for the position” or “So-and-so recommended that person.”

Some say the opposition party is slowing down the new administration by being harsh in confirmation hearings and holding up the government restructuring plan. What are your thoughts on such criticisms?

If there are legal problems or corruption found during a confirmation hearing, then it’s definite that we cannot approve that nomination. We don’t intend to single out a particular nominee and make him or her withdraw. As for the government restructuring bill, we can consent to all the plans except for the transition of the Korea Communications Commission’s authority to the new Ministry of Future Planning and Science.

Freedom and fairness in the media is fundamental and must be secured. We believe that the new administration wants to control the media with the shift in authority. The opposition party cannot just watch that happen.

How do you think the Park administration’s policy on North Korea will develop?

I expect the president’s policies will be carried out based on dialogue. We experienced failure in the Lee Myung-bak administration and its policy on North Korea.

I cannot guess about the timing for dialogue between the South and the North, but President Park doesn’t seem to get these things wrong.

At the trilateral meeting, I told her everything - more than she should know - about what progress was made in the North Korea-U.S. relationship during the Kim Dae-jung and Roh Moo-hyun administrations. She blinked her eyes, and it seemed as if she agreed with what I said.

I also advised her that North Korea will probably try to work around the South in the early stages of the administration and that our government should be ready. I told her that if we fall for such tricks, North Korea will control the South for five years. She nodded to what I said.

What do you predict will happen in the April by-elections?

There are three or four local constituencies currently vacant, and the rest are either seats for governor or district head.

Overall, we will not be affected much even if we lose because the regions were not previously represented by the DUP, but we aim to win several seats.

What is your response to rumors that former independent candidate Ahn Cheol-soo will create his own party?

I cannot tell him to do this and that, but it would be foolish of him to create his own party. He should bear with the so-called temptation of the devil. DUP officials know that if they join Ahn, they will fail [in their political careers].

Ahn will only be able to cement the role of his party if more than 20 lawmakers join him, but they will not go.

The DUP has a traditional brand that dates back more than 60 years, and that will not disappear. We would welcome Ahn if he decided to join the DUP. We went through the presidential election together, so we are like-minded. But we cannot force him to join us if he doesn’t want to.

Have you contacted him?

Ahn’s team has been contacting us. I cannot elaborate on this.

What do you think was the Achilles’ heel of Moon Jae-in and the cause of the DUP’s defeat in the presidential election?

First, I would blame the absence of strategy. Though we did well in winning support from voters in their 20s and also those in the Honam [southwestern] and Yeongnam [southeastern] regions, we had no strategy in Seoul, Chungcheong or Gangwon.

Second, there was no party commander. If we were filming a movie, Moon and Ahn were the two actors who did their best, but there was no director.

There’s solidarity when a lion commands 100 sheep, but in our case, one sheep commanded 100 lions. There was no top decision-maker.

What responsibilities do supporters of Roh Moo-hyun hold within the DUP?

The responsibility for an election defeat belongs to the person who took the lead - either Moon or Ahn - and then the party leadership and the election committee.

Politically responsible people would walk away from their positions. This has already happened within the DUP. The problem now is the upcoming party leadership election.