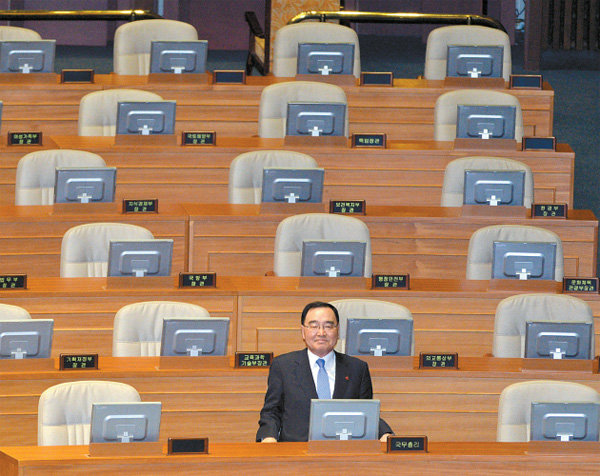 Prime Minister Chung Hong-won sits alone yesterday in the main conference hall of the National Assembly in the area reserved for cabinet members. No other ministers have been appointed as the deadlock over the government restructuring plan continues. [NEWSIS]

The Park Geun-hye administration has been paralyzed by an administrative vacuum that stretched to the ninth day since the inauguration.

A routine cabinet meeting yesterday failed to take place as the deadlock in the National Assembly continued over her government restructuring plan. Because of the deadlock, no ministers have been formally appointed except Prime Minister Chung Hong-won.

Park had no official activity on her schedule yesterday.

In her first nine days in office, Park has spent four days without any official events. 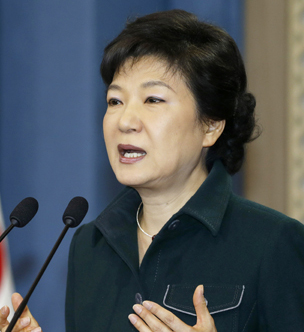 Although this is not the first time that the formation of the cabinet was delayed at the beginning of a president’s term, it was unprecedented for the weekly cabinet meeting to be skipped two weeks in a row.

Last week, the meeting did not take place because Park had no confirmed members of her cabinet. Since then, Chung was confirmed as the prime minister and formally appointed.

For Lee Myung-bak, Park’s predecessor, the first cabinet meeting took place on Feb. 27, 2008, two days after his inauguration. Because the prime minister was not confirmed at the time, the outgoing prime minister of the Roh Moo-hyun government hosted the meeting.

In his second week in office, Lee hosted the meeting himself and invited four ministers from the Roh cabinet in order to meet the 15-member quorum.

Yesterday also marked the final day of the February extraordinary session of the National Assembly. No progress was made toward a vote on Park’s package of bills to change the structure of the government.

The ruling Saenuri Party and the main opposition Democratic United Party held negotiations Monday night, but the talks broke down again. The two sides remain divided on the issue of the Ministry of Future Planning and Science being given policy oversight of the broadcasting industry.

Prime Minister Chung made an appeal before the legislature yesterday.

“If the government restructuring bills are not approved today, the administrative vacuum will continue for a significant time, and the people’s concerns will grow,” he said at the plenary session.

“I am making an earnest appeal before the lawmakers of the ruling and opposition parties to make a grand compromise before this legislative session ends and help the new administration launch itself smoothly,” Chung said. “If the National Assembly passes the bills, I promise that I will never let you down in conducting state affairs.”

While Chung was making his appeal, some DUP lawmakers jeered, and some Saenuri lawmakers raised voices in his defense.

With no breakthrough, the Saenuri Party yesterday submitted a request to begin yet another extraordinary session. It said the DUP refused to sponsor the request so it had to act alone.

With the request, the March extraordinary session is scheduled to open Friday.

As of yesterday, eight of Park’s 17 minister-nominees completed their confirmation hearings. Seven of them were confirmed by the Assembly, but Park has not formally appointed them. One confirmation is still pending.

The legislature, however, has not scheduled confirmation hearings for the ministries that will be affected by Park’s proposed government reorganization. Hyun Oh-seok, Park’s nominee to be the deputy prime minister for the economy and the minister of strategy and finance, and Yoon Jin-sook, who will head the revived ministry of maritime affairs and fisheries, are waiting for their hearings to be scheduled.

Park also needs to find a new nominee to head her pet project, the Ministry of Future Planning and Science. Her original choice, Korean-American telecom entrepreneur Kim Jeong-hun, gave up his nomination out of frustration Monday and left for the United States yesterday.

“I want to stress that delaying the scheduling of Hyun’s confirmation hearing is abuse of power by the opposition and dereliction of duty by the legislature,” said Representative Kim Gi-hyeon, deputy floor leader of the Saenuri Party. “I ask the DUP to cooperate with completing the confirmation of Hyun.”

As the deadlock continued, concerns grew in the ruling party that the president has gone too far. Park condemned the DUP for the administrative vacuum in a national address Monday, and the DUP denounced her for “trying to make the legislature her handmaiden.”

“Park gave an emotional appeal to the nation,” Saenuri lawmaker Kim Yong-tae said in an interview with SBS radio. “But I have to express concerns about the timing and her style. While the ruling and opposition parties were having negotiations, she gave an angry speech. For the next five years, the DUP is the most important negotiating partner. I wonder if it was appropriate.”

A former associate of President Roh Moo-hyun, however, said yesterday that the DUP should allow Park to push forward with her plan.

In an interview with the JoongAng Ilbo, Kim Byong-joon, former Blue House policy czar and deputy education prime minister in the Roh government, said the president, not the National Assembly, is responsible for the outcome of the government restructuring.

“If the government fails, it is President Park who will assume all responsibilities and criticisms,” Kim said. “So we should respect her plan.”