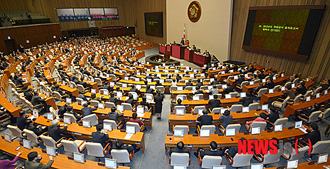 Changes made to the law last year to prevent the majority party from railroading bills through the National Assembly are partly responsible for the current legislative deadlock over government restructuring bills and the administrative vacuum of the Park Geun-hye administration, the ruling party said.

“Recently, the politicians have been letting down the people repeatedly,” Representative Lee Hahn-koo, floor leader of the Saenuri Party, said yesterday. “The laws governing the National Assembly and confirmation hearing process are frequently abused.”

Lee said the system needs to be revised again if the deadlocks continue.

In Korea, when the ruling party used its majority power to introduce and pass contentious bills, the opposition party often considered it a refusal to negotiate and an abuse of power. Opposition party members resorted to physical violence when bills were passed that way, which were a kind of Korean filibuster.

To end the brawls that embarrassed many Koreans, the ruling and opposition parties approved a series of change to the National Assembly Act last May 2. The new rules started with the current term for lawmakers, which began on May 30, 2012.

Under the revised National Assembly Act, the speaker of the legislature is not allowed to directly introduce a bill to a main session unless there is a natural disaster or a national emergency.

The speaker’s authority to directly introduce a bill was seen as the fastest way for the majority party to railroad legislation through.

The lawmakers introduced a “fast-track” system to advance stalled bills. A bill can be designated as fast-track, if, firstly, more than half of all the Assembly’s lawmakers, or a majority of members on a standing committee, make a request.

A fast-tracked bill will automatically advance to a main voting session after spending 180 days on a standing committee or 90 days on the Legislative and Judiciary Committee.

Currently, the ruling party and main opposition Democratic United Party’s are at loggerheads over the Park administration’s bill to restructure the government, which have also held up confirmation hearings for cabinet ministers.

Even if the ruling party manages to designate the government restructuring bills as fast-track items, the process will require at least 90 days.

The National Assembly has 300 seats and 297 serving lawmakers. The Saenuri Party has 152 lawmakers, making the DUP’s support crucial. The DUP has 127 lawmakers.

The Saenuri Party is in a catch-22 situation because it will likely be hard to revise the National Assembly law under the current rules.

“We created a very special legal system in which the minority party is given a de facto veto right,” Kim said in an interview with CBS radio yesterday. “And now we are seeing the result in this extreme case.”

In turn, the DUP criticized the Saenuri Party for blaming the revised National Assembly Act as an obstacle and demanding revisions.

“The new system is the key to the antibrawl law,” DUP Representative Park Beom-kye said. “This is a system to stop the majority from railroading a bill and the minority from using physical forces.”