In Gumi, two leaks of poisonous gas in 4 days

In Gumi, two leaks of poisonous gas in 4 days 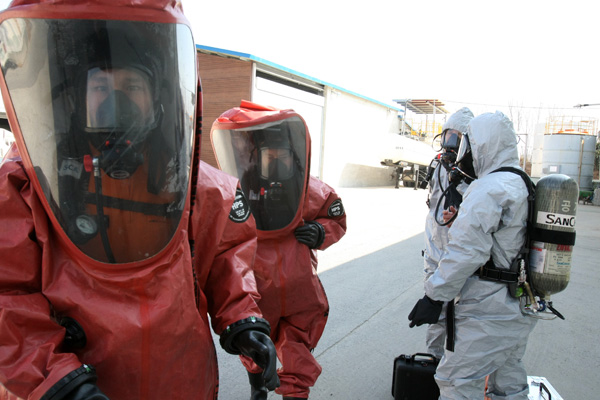 Firefighters in protective gear enter the Gumi Chemical compound yesterday to check on a chlorine leak that led to 11 workers being hospitalized in Gumi, North Gyeongsang. By Gong Jeong-sik

A leak of acid gas at an LG Siltron semiconductor factory in Gumi, North Gyeongsang, Saturday - which the company didn’t report for 16 hours - was followed by a chlorine leak at another Gumi chemical plant yesterday that led to 11 workers from factories in the area being hospitalized for respiratory problems.

Some 190 people working or living in the area went to a hospital to find out if they were exposed.

The leak at the LG Siltron plant didn’t lead to any hospitalizations. The leaks in the industrial center come half a year after a massive hydrofluoric acid leak at a Hube Global factory in the Gumi National Industrial Complex in September that resulted in five deaths, illnesses from gas exposure and damage to hundreds of acres of farmland and thousands of livestock.

In the most recent accident, workers at Gumi Chemical in the complex at Gongdan-dong yesterday were in the process of transferring liquid chlorine from a storage tank to a truck when a leak in a valve led to their exposure to chlorine fumes at 8:50 a.m. yesterday.

The workers discovered that the ventilation system for the facility was not functioning and tried to fix it without shutting the leaking valve. They were exposed to the chlorine fumes for some 13 minutes.

A Gumi Chemical representative said, “It was a mistake for employees to not check if the ventilator was working properly before the operation.”

A 35-year-old employee of the factory surnamed Seo was moved to an intensive care unit for respiratory problems, although police said he is not in critical condition. Ten other workers from factories nearby have also been hospitalized for similar symptoms.

Gumi Chemical said that 1 to 2 liters (67 ounces) of chlorine leaked. The Daegu Regional Environment Office checked four areas around the factory and found no traces of chlorine.

Exposure to 30 to 60 parts per million of chlorine in the air for over 30 minutes can lead to death. When chlorine gas comes in contact with eyes, nose and throat, it can lead to respiratory problems and blistering of the skin.

In the earlier incident, a mixture of hydrofluoric, nitric and acetic acids leaked from LG Siltron’s wafer-manufacturing factory in Insu-dong around 8:34 p.m. on Saturday, the North Gyeongsang Provincial Police Agency said.

LG Siltron, a subsidiary of LG Group that manufacturers wafers used to make semiconductors, failed to report the leak to authorities until 16 hours later, around 12:30 p.m. Sunday, and faces allegations of a cover-up.

There were no immediate casualties. LG Siltron said that 11 factory workers were replacing a damaged filter cover of a container holding the acids, and the leak occurred in the process of the transfer and testing of the chemicals. They reported that the leak was contained at around 4 a.m. on Sunday. The workers evacuated right after discovering the leak, the company said, so were not exposed.

Police said they faced difficulties analyzing the accident because LG Siltron took so long to report it. The company said because the leak was contained, they didn’t report it right away.

“The leaked amount was small so it was not measured and not reported to authorities,” an LG Siltron representative said.

The leak was equivalent to 30-60 liters, the North Gyeongsang police said. The Daegu Regional Environment Office ordered the factory to halt operations and began an investigation into the cause of the leak. It confirmed yesterday that the toxic gas had not spread to the air or water around the factory.

According the Ministry of Environment, there have been on average 15 cases of gas leaks or explosions at workplaces per year since 2006. Last year, there was a total of nine incidents. The Ministry of Employment and Labor estimates that the total number of industrial accidents involving chemical substances is around 300 annually.

On Jan. 28, a hydrofluoric acid gas leak killed one worker and injured four others at a Samsung Electronics’ memory chip plant in Hwaseong, Gyeonggi. The company took more than 24 hours to report the accident.