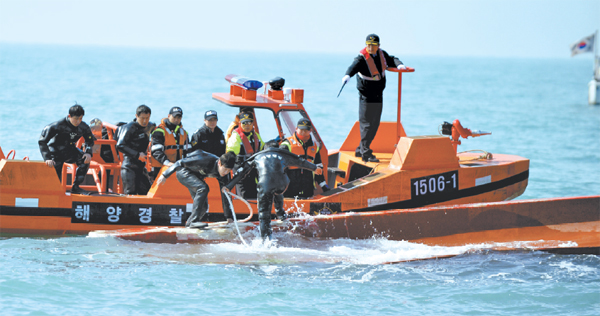 Mokpo Coast Guard officers yesterday search for seven missing sailors from the Daegwang vessel, which was sunk when a tanker ship ran into it around 1:27 a.m. Monday morning off the coast of Jindo, South Jeolla. [NEWSIS]

The Mokpo Coast Guard yesterday arrested the second-class navigator surnamed Lee of LPG carrier Ocean US for fleeing the scene after causing fishing vessel Daegwang to sink off the coast of Jindo, South Jeolla on Monday.

The fishing boat was in operation when the vessel with Lee at the helm collided with it at 1:27 a.m. Monday, leaving the sinking boat behind in an apparent attempt to evade responsibility for the accident.

“The fact that the Daegwang vessel was broken into three different pieces suggested that it was hit by a larger merchant ship. [Based on the finding,] We worked with 15 regional coast guards nationwide to track down the suspect,” said Kim Moon-hong, head of the Mokpo Coast Guard.

Along with Lee, the eight other sailors of the 2,967-tonne (3,270-ton) ship suspected of sinking the vessel have also been transferred to the Mokpo police for questioning yesterday after the naval police spotted traces of a collision on the vessel while it was docked at Yeosu Port, South Jeolla.

The Coast Guard plans to book Lee on a hit-and-run charge while dispatching investigators of the Korea Coast Guard to look for further evidence on the Ocean US vessel.

The police used a Vessel Traffic Service system to filter out 50 ships that were in operation near the collision area from 11 p.m. on Sunday through 11 a.m. Monday, when the incident occurred. It later narrowed down eight vessels suspected of the criminal act.

The Daegwang vessel was later found overturned 22 kilometers (13.7 miles) south of Dokgeodo in Jindo on Monday by a 7,700-ton merchant ship. The rolled-over fishing boat - which carried seven crew members including captain Park Jae-won - was broken into three pieces with its engine and cabin submerged. The bow and stern of the ship were found 10 kilometers away. All seven members have yet to be found.