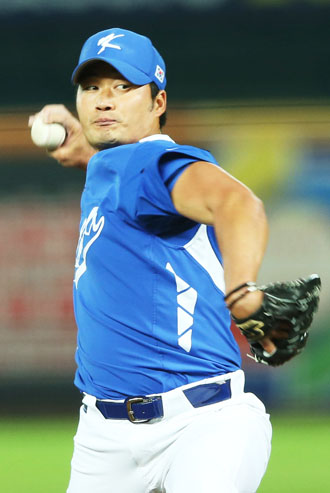 Oh Seung-hwan pitches against Australia in Korea’s second Pool B game at the Intercontinental Baseball Stadium in Taichung, Taiwan on Monday. By Lee Ho-hyung

Even Korea’s shortest-ever stint in the World Baseball Classic was long enough for closer Oh Seung-hwan to leave a strong impression.

Oh, who won the Korea Baseball Organization title for most saves two straight times through last season, took the mound in all three games for Korea and pitched 2 2/3 perfect innings, striking out six without a hit and walking one.

At the game against Taiwan on Tuesday night, he kept Korea’s 3-2 lead, retiring three batters in the ninth inning with only seven pitches. He struck out the first two with six straight strikes. Taiwan’s final at bat, Lin Che-hsuan, hit a fly out off Oh’s first pitch that ended the game.

Oh struck out two with 12 pitches in Korea’s 5-0 loss against the Netherlands last Saturday. He needed 11 pitches to strike out two to seal a 6-0 win over Australia on Monday.

In the inaugural WBC in 2006, Oh, then in his second year as a professional, recorded a save and struck out three, drawing compliments from then-Team U.S.A. manager Buck Martinez. Oh was less impressive in the second edition in 2009, allowing two runs in two games and taking a loss. His performance at the latest Classic immediately attracted attention, with the Japan’s Daily Sports reporting on Tuesday that Japan’s Hanshin Tigers have a deep interest in Oh, putting him on the same level or even higher than Korean legend Sun Dong-yul. Sun, now the Kia Tigers manager, had 98 saves during his four-year career with the Chunichi Dragons of Nagoya through 1999.

The Hanshin Tigers have been looking for a closer since Kyuji Fujikawa moved to the Chicago Cubs, according to the Japanese paper. It also said that some other Japanese clubs such as Chunichi, the Orix Buffaloes and the Tohoku Rakuten Golden Eagles also have their eye on Oh.

Major League teams are also reportedly watching him with interest. During Korea’s game against Australia on Monday, an Ilgan Sports reporter saw about 20 Major League scouts at the Intercontinental Baseball Stadium in Taichung suddenly stop talking when Oh took the mound in the ninth and point a speed gun at his pitches.

One scout said Oh was the most impressive of the Korean pitchers.

His speediest fastball can reach up to 157 kilometers per hour (98 miles per hour) and travels at 150 kph on average. His career earned run average is 1.69.

After the 2012 season, Oh acquired the right to play overseas through the same pre-free agent system that Ryu Hyun-jin used to sign with the Los Angeles Dodgers at the end of last year.

But the Lions didn’t want to let him go, resigning him for 550 million won ($508,036), up 44.7 percent from a year earlier. Rumors circulated at the time that the team promised to let Oh play overseas after the 2013 season if he accepted the offer. The club has denied that. He will become a free agent after the 2014 season.

Oh has expressed a willingness to play in another country if he gets the chance. He and his Team Korea members arrived in Korea last night.