At 26, Yoon Si-yoon breaks out of his shell

At 26, Yoon Si-yoon breaks out of his shell 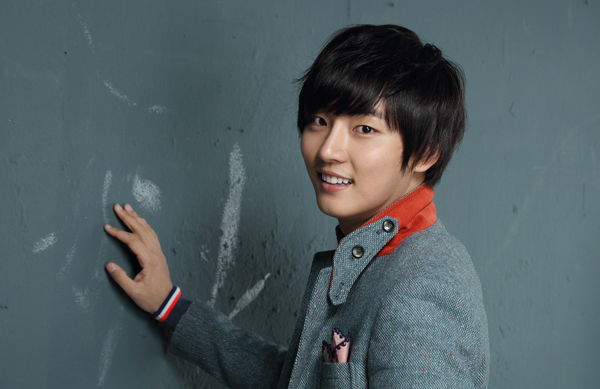 Yoon Si-yoon transformed his public image with an unconventional role as a free-spirited and fun-loving guy in “Flower Boys Next Door.” By Yang Gwang-sam

Rising actor Yoon Si-yoon’s roles have always seemed a perfect match. He debuted as a troubled yet considerate teenager in “High Kick Through the Roof” (2009) and was a patient and hard-working baker hopeful in “King of Baking, Kim Tak-gu” (2010). Just like his characters, Yoon, 26, is a considerate man of few words.

His recent role, however, broke the trend. Enrique Geum from “Flower Boys Next Door” arrives in Seoul from Spain and is a free-spirited, fun-loving and bubbly character who eventually falls in love with a lonely girl who has few friends (played by Park Shin-hye).

Though just 16 episodes, the cable drama on tvN has generated a lot of buzz, especially for Yoon’s gifted portrayal of his unique character.

Ilgan Sports, the sports and entertainment daily of the JoongAng Ilbo, recently caught up with Yoon and bombarded him with questions about his recent role and immediate plans.

Q. You’ve just finished shooting the last episode of “Flower Boys Next Door.” How do you feel?

A. I think it will take some time for me to come out of character. I was so happy during the whole production because many people loved the drama and my character - especially young viewers - and it created so much publicity.

What was it like playing a character who is quite different from your own personality?

I was quite inspired by the character, and I think I’ve become a lot brighter and more outgoing compared to before.

You teamed up with producer Jung Jung-hwa, who has directed many hit films such as “When Romance Meets Destiny” (2005). Is he a director who gives room for actors to be involved in the production?

Yes, he is. In the last date scene involving me and Park, the script simply indicated: “The two of us go on a date.” So, I had to think about the details as if I were preparing for a date with my real girlfriend. That’s how the last scene was created.

Since you worked together, what do you think about Park?

She is a natural-born actress. She smiles no matter how tired she gets on set. She is also a good partner because she pays attention to my every word and facial expression even when off camera. Thanks to her, I was able to better immerse myself in my character.

Are you aware that your kissing scene with Park has become the talk of the town?

I would say it was a kind of “clash kiss” because we got to kiss each other as we fell to the floor. In reality, it is impossible to kiss like that.

If that happened in real life, people would break a couple of teeth. I had to think about posture and lip angle to make the scene look real. It was such a difficult scene, and we had to retake it a couple of times.

Don’t you think your latest role was a bit of a surprise after “King of Baking, Kim Tak-gu”?

“King of Baking, Kim Tak-gu” was a huge hit, but it stressed me out. I decided to go for this drama on tvN because I thought I would be free from burden of high viewership.

I used to act as if I was solving a math problem while acting, but I learned how to enjoy myself on set this time.

You previously worked with Joo Won, who played your archrival in “King of Baking, Kim Tak-gu.” At the time, you were both rookie actors but have now become quite popular. What do you think when the media compare you with Joo?

When we did the drama, I was jealous of his physical strength. We often stayed up all night during production and he was always alive and kicking while I dozed off all the time. I tried to find out what made us so different and realized Joo knew how to pace himself from his time doing musicals and plays. He inspired me, and I began working out after that. I usually work out between 10 p.m. and 11 p.m. so that I can prepare for late-night shooting.

Do you have a plan to make a transition from television to the big screen any time soon?

Of course! After years of experience in dramas, I want to work on a film.


Many actors and actresses leave for overseas and do drama series or films with actors abroad. What about you?

I think we need a deep understanding of foreign countries before working in them. It’s not all about waving your hands at foreign fans. You need to know the language, culture and sentiment of the country. I always try to keep these things in my mind when I go abroad to work on projects.