Cigarettes may cost up to 2,000 won more a pack

Cigarettes may cost up to 2,000 won more a pack 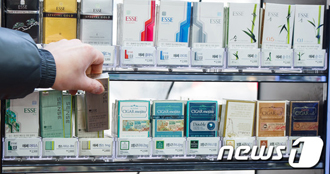 Korean smokers may have to decide whether it is worth paying an additional 2,000 won ($1.8) to keep their habit when buying a pack of cigarettes later this year.

Representative Kim Jae-won of the ruling Saenuri Party, a nonsmoker, said yesterday he will put forward a revision in the National Health Promotion Act and local tax law.

In a statement on the revision released to the media yesterday, the nonsmoking lawmaker said his proposal would increase cigarette prices by 2,000 won to reach 4,500 won.

The 58-year-old Kim added his plan aims to increase the tobacco consumption tax currently set at 641 won by 92 percent to 1,169 won. Through the revision, Kim also pushes for another 224 percent hike in taxes for the national promotion health act. Taxes would increase from the current 354 won to 1,146 won for each cigarette pack.

“Cigarette prices in Korea are the lowest among the 34 OECD member states, as there has been no price increase for eight years since 2005,” said the prosecutor-turned-lawmaker.

“Given the inflation rates, the real prices for cigarettes have been in decline while the country’s smoking rate is on the rise.”

Representative Kim added the revision will also require the government to spend 10 percent of national promotion health funds on a nonsmoking campaign from the current 1.3 percent.

In Korea, nearly one in three, or 27 percent, people aged 19 and older smoke, according to a study conducted in 2010. For male adults, 47.4 percent enjoy their smoking habit.