Viewers get their satisfaction from late-night food shows

Viewers get their satisfaction from late-night food shows 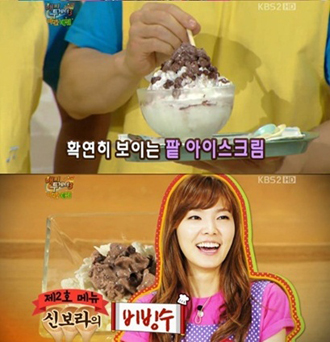 “Happy Together Season 3” was losing viewers until it added a segment called “Late Night Snack Shop,” which helped the show regain its No. 1 spot every Thursday night.

Around 11:30 p.m. every Thursday, the most-searched keywords on the nation’s major Web portals aren’t celebrities involved in scandals, but weird culinary mash-ups like “Bibingsu,” a popsicle combined with frozen milk (pictured on left), or “Todalbok,” stir-fried tomatoes and eggs.

This all coincides with the air time of “Happy Together Season 3” on KBS2.

The long-running variety show “Happy Together” began in 2001 and has stayed strong since then.

With new programming in the same time slot, such as a gossipy talk shows where celebrities dish on each others’ bad habits, “Happy Together” was on the verge of fading away, but a recently added segment “Yaganmaejeom,” or “Late Night Snack Shop,” is bringing it back to life. During the show, celebrities introduce their own quirky, cobbled-together recipes for late-night snacks. It’s been popular enough to help the show regain its No. 1 Thursday night spot.

Many get their satisfaction from merely watching the food being made on-screen. Some jot the recipes down and save them for weekend brunch.

This is a big change from when cooking was considered a low and menial job.

“This job was considered one of the lower-level jobs when I first started cooking, but it has become one of the most respected jobs in Korea,” said Leo Kang, a judge on “Master Chef Korea.”

The perception of food has also grown more sophisticated.

“It seems like people used to just fill their stomachs, but not anymore,” Shin Jong-su, an official at cable food channel O’live TV, told one local media outlet.

“People are now interested in how the bowl of soup is created in the kitchen. By watching these shows, they seem to be filling an emotional void,” he explained.

Food seems to be everywhere. O’live TV has seen an increase in viewership since switching its focus from style to food in March 2011 and a number of food documentaries hit the screen in Korea last year. One was “Jiro Dreams of Sushi” (2011) with full shots of mouth-watering sushi and the other was “El Bulli: Cooking in Progress” (2011).

It was hard to find food documentaries before, but the screening of those two films is a sign that a majority of Koreans have access to foods in a different way that they did in the past. “There were no food shows until the late ’90s,” said food critic Hwang Kyo-ik. “People often say there is a link between economy and food. They say people start to see food not as a source of satisfying one’s hunger but something that is more artistic and aesthetic when one’s national income surpasses $20,000.”

Hwang, however, said this prevalent tendency doesn’t mean that all Koreans are ready to enjoy and understand food.

“Broadcasters are well aware that this food content yields higher viewership. Thus they try to depict food in distorted ways so that the visual can stimulate viewers’ palates by putting the food on a rotating dish or using all imaginable camera and lighting tricks.

“These viewers are satisfied with manipulated images, what I call food pornography. After all, these food-themed shows don’t help viewers understand what they eat better, but just make people consume the content as a source of entertainment,” Hwang said.