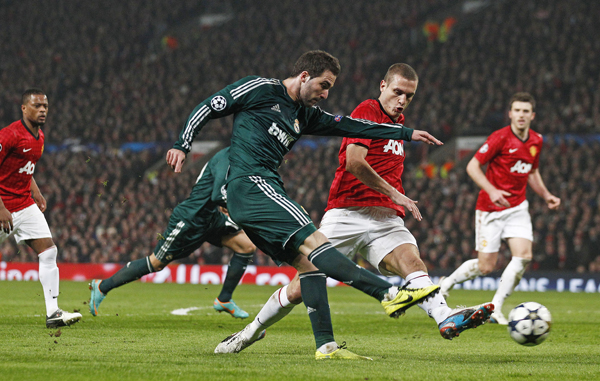 Real Madrid’s Gonzalo Higuain from Argentina fires a cross that was turned in by Cristiano Ronaldo from Portugal to give the team the lead during their Champions League round of 16 match at Old Trafford Stadium in Manchester, England, on Tuesday. [AP/YONHAP]

MANCHESTER, England - Just like 10 years ago, a Ronaldo scored at Old Trafford to send Real Madrid through in the Champions League and eliminate Manchester United.

Back then it was the Brazilian Ronaldo, who scored a memorable hat trick.

This time it was Cristiano Ronaldo, back at United for the first time since leaving four years ago, who was on the score sheet. And the Portugal forward opted not to celebrate the goal that clinched a 2-1 victory Tuesday for the nine-time champions and a place in the quarterfinals for the third season running.

“I am happy inside because Madrid got through,” Ronaldo said after the 3-2 aggregate win. “But on the other hand I feel a little bit sad because of Manchester United.”

The last-16 encounter had been pointing toward a United win at the start of the second half when Sergio Ramos deflected Nani’s cross into his own net to give the hosts a 2-1 aggregate lead.

But the game swung back in Madrid’s favor in the 56th minute when Nani was sent off for a studs-up, flying challenge on Alvaro Arbeloa.

Madrid took control of the last-16 encounter with two goals in three minutes, with Luka Modric netting a powerful equalizer off the post in the 66th before Ronaldo’s 40th goal of the season.

The goal devastated the home fans who had cheered Ronaldo before his first match at Old Trafford since swapping Manchester for Madrid for a world record $131 million in 2009.

“Mentally it was not easy for Ronaldo,” Madrid manager Jose Mourinho said.

But a night that started with affection for Ronaldo and a 1,000th career appearance for United’s Ryan Giggs ended in acrimony from the hosts aggrieved by the red card.

At the final whistle, Giggs was angrily pointing at referee Cuneyt Cakir as Rio Ferdinand sarcastically clapped in his face and manager Alex Ferguson made his fury clear on the touchline.

It was a defeat that was hard to take for United - and there was sympathy from Mourinho.

A man so often linked with one day replacing the 71-year-old Ferguson at Old Trafford endeared himself to the United crowd by walking off the pitch without celebrating, in stark contrast to his charge down the touchline during a win as FC Porto manager here in 2004.

“We didn’t play well, we didn’t deserve to win,” Mourinho said. “Independent of that [the red card] the best team lost.”

Ferguson was so angered by the sending off that he didn’t face the media after the match, sending assistant Mike Phelan in his place.

“We had thought we had got the tactics right in game, which was such a big occasion - we felt as though we were comfortable at times,” Phelan said.