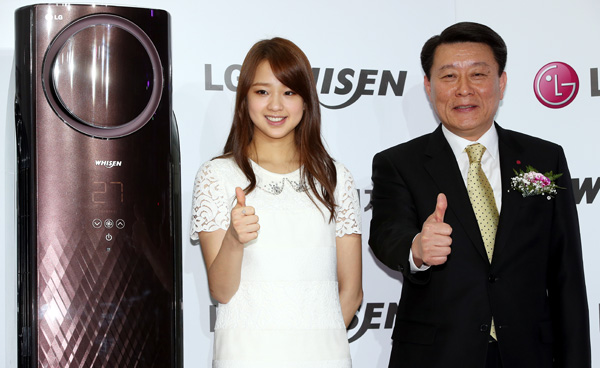 Whimsical weather may turn out to be a blessing for LG Electronics, at least when it comes to air-conditioner sales.

“Overall air-conditioner sales were sluggish last year, but sudden intense heat in June and August resulted in supply shortage. We usually begin preorders in early January and the preorder volume accepted thus far this year is close to the level in 2011,” he said at a press conference in central Seoul.

Because of increasingly unpredictable weather conditions, forecasting the optimal supply is getting ever more difficult for producers. One approach LG is trying is to induce more customers to buy the home appliance at a lower price before summer, Choi added.

LG yesterday unveiled a new premium air-conditioner, “Son Yeon-jae Special G,” named after the popular female gymnast. The new device under Whisen brand blows colder by 4 degrees Celsius (7 Fahrenheit) than existing air-conditioners. It has also adopted a technology that sends the wind in four directions - up, down, left and right - to more quickly cool the space. Most notably, it has an unprecedented voice recognition system for an air-conditioner. Users can prompt the unit by saying Whisen within 5 meters (16.4 feet) of the machine: “Whisen, lower the temperature,” for instance. Both LG and its rival Samsung adopted voice recognition features previously, but the function required a remote controller or smartphone.

The premium air-conditioner, costing 2.7 million won ($2,493) and 3.1 million won, is the first air-conditioner in the G series of high-end products from LG. The tech giant last month announced a so-called “G Project,” which it believes will help it leap to No. 1 in the global home appliance market in three years. G stands for “great,” in terms of capacity and efficiency; “genius,” referring to its smart functions; and “good” design. Its top-notch smartphone is also called Optimus G.