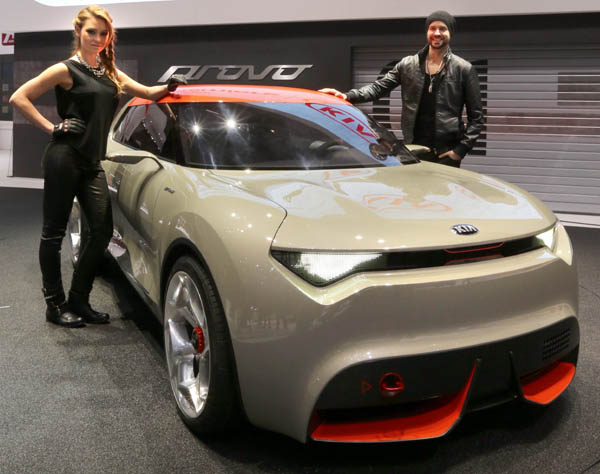 Kia Motors’ concept car Provo was introduced at the motor show in Geneva. Provided by the company

Kia’s new concept car Provo is designed to provoke comment. But to many across Britain and Ireland, the name sounds like a celebration of terrorism.

British lawmakers appealed Tuesday in the House of Commons for the Korean carmaker to junk the name of its planned mini sports coupe because ”Provo” is the street name for the dominant branch of the outlawed Irish Republican Army.

The Provisional IRA killed nearly 1,800 people during its 1970-1997 campaign to force Northern Ireland out of the United Kingdom.

Kia insisted the Provo - an experimental prototype unveiled this week for the International Geneva Motor Show and years away from production - was named to suggest “provocative,” not IRA bombings and shootings. And in a follow-up statement, Kia said it would be certain not to market any future car as a Provo in the United Kingdom or Republic of Ireland.

“I accept that this was a mistake made by the company, and I know that their decisive action will be welcomed by many people, in Northern Ireland and beyond, whose lives have been affected by the murderous actions of the Provisional IRA,’’ said Gregory Campbell, a British lawmaker for the main Northern Ireland party, the Democratic Unionists.

Not everybody took the matter as sternly as Campbell. The idea of a car called the Provo going on sale in Belfast sparked a rapid-fire battle of Ulster wits across the Internet.

On an Irish news aggregator called the Broadsheet, posters noted that the car’s detailing was in orange, the favored color of the British Protestant majority.

“Does my bomb look big in this?’’ asked one. Another noted the car needs no satellite navigation system, because the car “already knows where you live.’’

Kia is hardly the first automaker to stumble when picking model names.

In Spanish, Chevy’s Nova meant “doesn’t go,’’ Mazda’s LaPuta translated as “the whore,’’ and the Nissan Moco as “booger.’’

The Honda Fitta raised eyebrows across much of Scandinavia, where the word refers to women’s private parts.

When Toyota launched the MR2, they soon found saying those letters and numbers in French made it sound as though the car smelled of excrement.

And, of course, to the military-minded or excessively nervous, Kia’s own corporate name suggests “killed in action.’’ AP