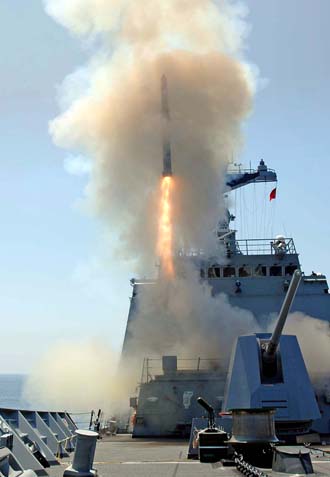 In a photo released in June 2009, the Korean military test-fires a Korean-built torpedo Hongsangeo, or Red Shark, from a Navy destroyer. [JoongAng Ilbo]

As the country prepares for its annual joint military drills with the United States next week, defense officials revealed that the Korean Navy’s recent test fires of its costly antisubmarine torpedoes were only 60 percent successful and thus were not suitable for intended missions.

Over the course of nine years since 2000, the Korean-made torpedoes, called Hongsangeo, or Red Shark, cost 100 billion won ($92.7 million) to develop, but the precision-guided weapon fails to live up to the hype with its unreliable accuracy.

Last July, the Navy conducted its first test of the ship-to-submarine torpedo, which ended unsuccessfully as it did not hit its intended target 60 meters (197 feet) underwater and went missing in the sea.

These 5.7-meter long, 820-kilogram (1,808-pound) torpedoes which have a 30-kilometer range shoot up into the air before they blast into the sea to destroy targets under the ocean, namely submarines.

An army official said that in order to detect the cause of the failure of the first field test, since last October, the Navy test-fired the vertically-launched missiles in four additional field tests, taking eight shots in total. But only five shots successfully hit the target.

The three failed shots went missing, including the last two test shots fired on Feb. 24 in the East Sea during coordinated antisubmarine exercises with the United States.

The military official added, “There is no danger of the torpedo exploding because they are installed with a mechanism which prevents explosions in case they are swept away in waters.”

The torpedoes should succeed at least three out of four times to be considered suitable for use.

At a time of heightened tension with Pyongyang, the North Korean Army also is preparing for military drills to coincide with the South’s and has begun submarine drills in the East and Yellow Seas.

The Defense Acquisition Program Administration (DAPA) and the Agency for Defense Development, the developers of the state-funded project said back in 2009 that Hongsangeo was the “second perpendicularly-shot torpedo in the world that targeted enemy submarines.”

“The Hongsangeo will be re-examined from the design phase,” said the military official, “and depending on the results of the review, its assignment to the field may be canceled.”

The DAPA said that for precision-guided weapons, the accuracy rate should be 70 percent at 13 shots.