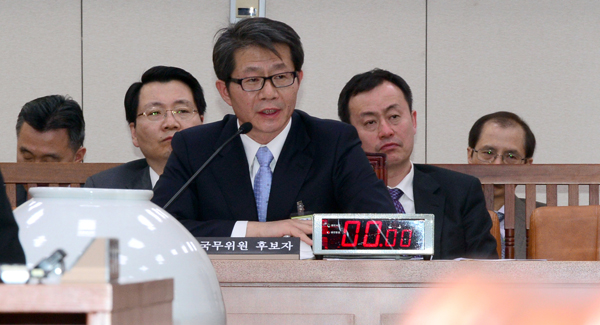 Even with North Korea’s escalating threats, the administrative vacuum remained in the Park Geun-hye government with top security posts vacant.

Pyongyang renewed its threats Tuesday night saying it might walk away from the Korean War armistice. Yesterday, it warned of nuclear strikes on Seoul and Washington.

During the presidential campaign, Park promoted her conservative standing on national security issues while also stressing the importance of trust-building with North Korea. After her victory, she announced a plan to create a National Security Council in the Blue House to oversee the security policies and nominated former Defense Minister Kim Jang-soo as its head.

The legislative deadlock over the government restructuring, however, has prevented her from formally appointing him to take charge of the security situation.

“We will do our best to minimize the administrative vacuum with the understanding that we are in a national emergency,” presidential spokesman Yoon Chang-joong said yesterday.

According to Yoon, Huh will host daily situation briefings at 8 a.m., and presidential secretaries are ordered to work with the relevant ministries.

The top priority for Park yesterday appeared to be public safety after a series of poisonous chemical leaks in industrial facilities and a fishing boat sunk off the coast of Jindo, South Jeolla, on Monday.

She telephoned Yoo Jeong-bok, security and public administration minister nominee, and ordered him to make site inspections to check on the leaks in Gumi, North Gyeongsang, and the boat sinking.

Park issued no specific message on the North’s threats.

“It is premature, and the situation is not so grave [for the president to call a meeting of the NSC],” a senior presidential aide told the JoongAng Ilbo. “It is not desirable for us to make a fuss about their threats.”

Kim Jang-soo, whose formal appointment as head of a “control tower” for national security issues is still pending, could not attend the senior secretariat meeting yesterday.

“This is a very abnormal situation,” Yoon said. “But the NSC is maintaining close cooperation with the Ministry of National Defense, the military and other ministries. And the office of the foreign affairs senior secretary is also handling the situation.”

Due to the delayed formation of the administration, Park has yet to formally appoint her ministers for foreign affairs, unification and national defense. While Yun Byung-se has been confirmed as foreign minister, he was not officially appointed.

Ryoo Kihl-jae went before a confirmation hearing yesterday for the post of unification minister, and senior Unification Ministry officials including its spokesman and chief policy planner accompanied him to the National Assembly. About 20 ministry staffers went to the legislature to support the nominee.

Kim Byung-kwan, the defense minister nominee whose confirmation hearing will take place tomorrow, stayed in an office near the Ministry of National Defense in Yongsan, central Seoul, and was briefed privately through sources about the latest North Korean intelligence.

“This is a serious issue,” said a senior security official. “Threats are growing every second but outgoing officials are in command while incoming leaders are outside the government.”

Outgoing Foreign Minister Kim Sung-hwan had no official schedule while Yun, Park’s foreign minister nominee, was briefed about the latest development including the United Nations Security Council discussion on fresh sanctions on the North.