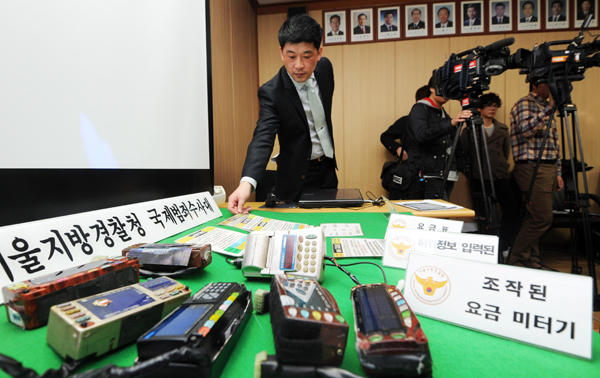 A police officer from the Seoul Metropolitan Police Agency yesterday shows an array of meters altered by illegal call van drivers who are accused of overcharging foreign tourists. [NEWS1]

The Seoul Metropolitan Police Agency arrested yesterday more than a dozen call van drivers on charges of picking up foreign tourists with less than 20 kilograms (44 pounds) of luggage and overcharging them.

“The drivers have mainly targeted foreign tourists who are considered to have less knowledge about the right taxi fares. They drove around tourist-packed areas like Myeong-dong and Dongdaemun shopping centers and Insa-dong to attract travelers,” said Kang Ki-chan, the police officer in charge of the investigation. 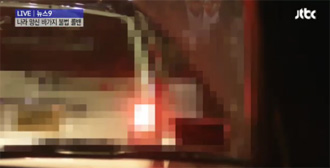 Twenty drivers were arrested in total. The law requires that call vans or large taxis seating up to six passengers be used to transport only passengers with freight of at least 20 kilograms.

The police said that some of the arrested tourist hustlers - including a man only identified by his surname Baek - are also accused of illegally installing taxi roof signs and meters in violation of the law that bans the vehicles from having them.

Among the arrested, Baek is reported to have charged three Singaporean tourists 260,000 won for a 60-kilometer ride from the Western Annex of Seoul Station to Incheon International Airport using his altered meter.

Another suspect is accused of ripping off two Thai tourists with virtually no luggage by charging fares that are almost 10 times the actual rate, according to the police.

The travelers were asked to pay 400,000 won for the distance between Incheon International Airport and Bucheon, Gyeonggi, west of Seoul, but regular fees are estimated around 40,000 won.

One of the arrested, identified by his surname Myung, even locked the door when five Chinese tourists complained about an overcharged fee of 96,000 won from Myeong-dong, central Seoul, to Dongdaemun, eastern Seoul, according to the police.

Some of the arrested are also accused of generating fake receipts with false numbers of different cars in apparent attempts to evade responsibility for the overcharged rate. Predatory call van drivers have long been a headache for their illicit practices. The police recently toughened up the crackdown on the cab drivers by imposing criminal penalties rather than taking administrative actions.

“The illegal practices really take their toll on Korea’s image because the victim tourists usually post complaints on the Web forums. We will keep clamping down on them to prevent such practices,” Kang said.