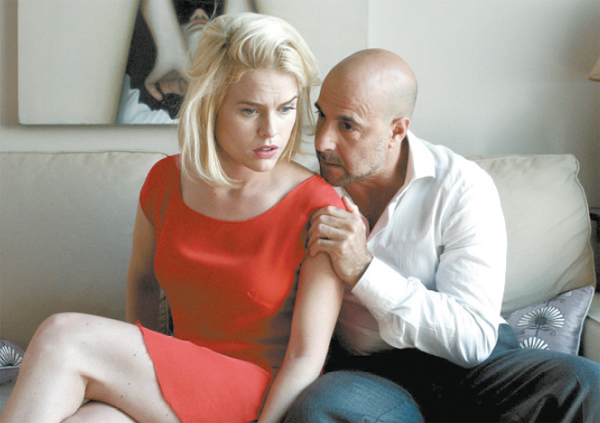 Alice Eve, left, and Stanley Tucci talk in a scene from “Some Velvet Morning,” a film that will be shown at the Tribeca Film Festival running April 17-28 in New York. [AP/NEWSIS]

NEW YORK - The Tribeca Film Festival opens next month with 89 feature films from new and established directors, ranging from hard-hitting documentaries to romantic and teen comedies and gripping dramas.

More than 6,000 films from 30 countries were submitted to this year’s festival, which was established more than a decade ago to revitalize the New York neighborhood devastated by the Sept. 11 attacks on the World Trade Center.

Along with the 34 documentaries and 55 narrative feature films, the festival that runs from April 17 to 28 will include five projects in a new section called Storyscapes about trends in digital media.

Documentaries will focus on famous people such as comedians Moms Mabley and Richard Pryor, along with Broadway actress Elaine Stritch, as well as movies that delve into the oil industry and hydraulic fracturing, or fracking.

The romantic comedy “The Pretty One,” the final chapter of Richard Linklater’s trilogy, “Before Midnight,” and Neil Jordan’s gothic vampire drama “Byzantium” will be among the narrative fiction films.

“When we talk about the narrative competition, we talk about the kind of films that left us thinking about that film two days later, that really made a personal impact on us, that moved us,” Geoff Gilmore, the creative chief officer of Tribeca Enterprises, said in an interview.

The festival will kick off with the world premiere of “Mistaken for Strangers” by Oscar-nominated filmmaker Marshall Curry. It depicts the experiences of director Tom Berninger on tour with his brother, Matt, the front man of rock band The National, which will perform following the premiere.

“Big Men,” a documentary written and directed by Rachel Boynton and produced by Brad Pitt, will have its world debut and open the world documentary section.

Another documentary, “Gasland Part II,” directed and written by Josh Fox, delves into the consequences of fracking.

In “Bluebird,” which will kick off the narrative fiction films, actress Amy Morton plays a school bus driver living in a Maine logging town whose world is shaken by tragedy. It was written and directed by Lance Edmands.

Actress Emma Roberts appears in Andy Cochran’s “Adult World,” in which she plays a poet who takes a job in a sex shop and is being mentored by a reclusive writer played by John Cusack.

Paul Rudd and Paul Giamatti team up in the buddy comedy “Almost Christmas” by director Phil Morrison, and Oscar-winner Melissa Leo plays a mother whose child is addicted to pain killers in the film “Bottled Up” by Enid Zentelis.

The five projects in the Storyscapes cover a variety of topics but look into how audiences are using new technologies.

“What we are going to do for the first time ever at the festival is create an immersive space that audiences can visit,” said Ingrid Kopp, the director of digital initiatives for the Tribeca Film Institute. “They will be able to look at these five projects as installations.” Reuters