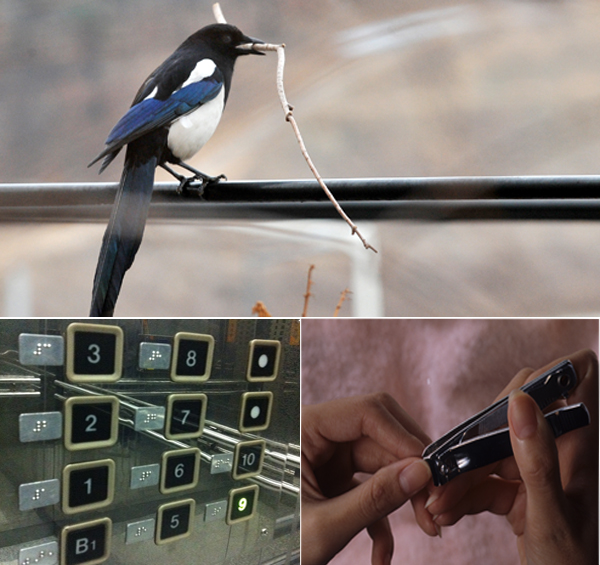 Top: For Koreans, if a magpie chirps in the morning, you can expect good news or a pleasant guest. Above left: Some buildings skip fourth floor or use “F” as an alternative as Koreans believe number four brings bad luck. Above right: Koreans believe clipping your nails at night will bring in your doppelganger. [JoongAng Ilbo]

Do you suffer from triskaidekaphobia? That’s a fear of the number 13, common in many Western countries. People have a particular fear of Friday the 13th, and many countries avoid using the number in buildings and addresses. A lot of tall buildings simply skip the number, with the 12th floor followed immediately by the 14th floor.

Koreans don’t have this superstition. Instead, people here are terrified of the number four as it has the same pronunciation as “death” in Chinese. You will understand what I’m talking about if you have noticed that we use the letter “F” rather than the digit “4” in elevators.

It may seem somewhat ironic that the most wired country in the world is still obsessed with long-standing superstitions, but many of them are fascinating to know. Here are some explanations of Korean folk beliefs.

Never write your name in red

School kids get tests and papers marked in red pen from their teachers all the time, but if they find their name written in red, they will freak out!

In ancient Asia, red was considered the color of royalty, and only emperors were allowed to write their names in red. They never permitted any ordinary person to show contempt for their authority by using the color red. A commoner caught violating this sacred rule could even be put to death, accused of challenging the king!

During Japanese occupation, patriots who fought in the independence movement had their names crossed out in red ink if they were killed. The practice passed down, and over time, Koreans started to believe that writing their names in red would bring bad luck. Ironically, Koreans do not mind using a red stamp as their registered seal on legal documents.

Whistling at night calls snakes out

Korean moms keep their kids from whistling or making loud noises at night by threatening that snakes will come out. If the kids were smart, they would know that snakes have no ears and can’t hear.

So why would moms scare their children with such a story? When there was no electricity, a farmer’s daily routine was to go to bed early and wake up as early as possible to work during the daytime. Adults who were involved in physical labor needed time to restore their energy by getting a good night’s sleep every night. Parents who didn’t want their children to interrupt their rest quieted them with the tale.

If a magpie chirps in the morning, you can expect good news or a pleasant guest

Magpies have long been considered birds of good luck in Korea, and farmers used to leave some fruit on trees for magpies during the harvest season.

The birds’ highly developed eyesight and sense of smell made people believe that they could even remember the distinct odor of the territory they were in.

When a stranger or a wild animal approached the village, magpies would make noise as they detected something unusual, a sign of warning as their boundary was breached.

In remote towns, strangers would often mean relatives or children of the villagers who moved out upon marriage.

So even today, people anticipate a surprise guest or a lucky day if they hear a magpie chirp.

In a time when people had to live in dark rooms without power, clipping nails with a sharp clipper must have been dangerous, especially for kids. Scattered clipped nails on a clean floor would make moms fly off the handle after they finished house chores.

But besides these obvious reasons, there’s a very interesting folktale about why carelessly trimming nails is a bad habit.

Once upon a time, there was a boy who used to cut his nails everywhere in his house. One day, the boy encountered someone who looked exactly the same as himself. It was actually a rat that was secretly eating the boy’s nails and turned into his doppelganger. They looked identical, so no one in his family could tell which was real.

When the real boy was about to be mistakenly kicked out of the house, a cat from next door pounced on the rat and the animal returned to its natural form. The story has been passed down by our ancestors to teach the young that every hair and shred of skin is sacred as it is inherited from their parents.

Pull out the eyelashes around a stye, leave them on a stone in the street and wait for a victim

Why do people have to watch the eyelashes placed on a stone? It stems from a belief that your stye will be passed to the person who stumbles on the stone.

It sounds a bit mean to ambush a passerby with your stye, but plucking the eyelashes around the bump makes sense in a way. This helps drain pus from the inflamed area. Of course, if you do have a stye, go see a doctor and don’t start yanking out your eyelashes!

A traditional wedding used to begin in the bride’s house. The groom would arrive on a horse and wait for his wife-to-be, who would enter the venue sitting in a palanquin carried by bearers. A palanquin is called gama in Korean, which sounds the same as hair whorl.

Most people have a single hair whorl, but some have two. Older people who liked mischievous jokes used to pick on kids with two hair whorls, or double crowns, telling them that they were destined to ride a palanquin more than once.

If a child’s baby tooth falls out, throw it on the roof

When a child’s baby tooth falls out, Korean parents throw it on the roofs. This ritual is related to the fortuitous bird, the magpie. Magpies can be regarded as an equivalent to the tooth fairy of the West, and parents sing a traditional nursery rhyme “Magpie, magpie, take this old tooth and give us a new one” to wish for a healthy replacement for their baby. This custom has faded away as more and more families now live in apartment buildings.

If you like chicken wings, you’re more likely to be a “player”

Chicken is low in fat and easy to digest. Some of the well-known health benefits of chicken include high-quality protein and abundant amino acids.

“Donguibogam,” the book of Korean medicine, also describes the efficacy of the meat in boosting energy, promoting healthier skin and maintaining bone density, especially chicken wings that contain a large amount of chondroitin sulfate and collagen.

Despite the scientific basis, it does seem that chicken wing fans made this superstition up to boost their egos and justify their snacking habit, but would you agree that someone who has younger-looking skin and enhanced stamina is more likely to have an affair?

I avoid whistling after the sun goes down and would never sign my name with a red pen, but am I the only one who scoffs at trimming my fingernails at night?

I wish you the best of luck and hope you wake up tomorrow to a magpie chirping away before receiving some wonderful news!