Jackie Chan meets up with his boy band

Jackie Chan meets up with his boy band 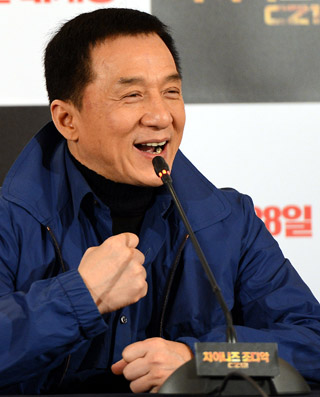 Hong Kong-born action film star Jackie Chan has paid a visit to check out a Korean boy band that he and a former Korean hip-hopper Hyun Jin-young have teamed up to produce.

The group, named “Double JC (JJCC),” consists of five Korean boys. However, the producers are thinking of adding one new Chinese member in an attempt to make inroads into the Chinese entertainment
market as well. The group has not yet made a debut, according to news reports, but both producers are planning its debut soon. The members are known to be highly skilled in diverse areas including
performance, vocal and rap while still having the “looks,” as they were trained for eight years.

Chan, who is arrived in Korea on Feb. 18 to promote his new movie “Chinese Zodiac,” paid a visit to the group’s training center on Tuesday to encourage them.

Meanwhile, Hyun posted a picture of him and the action star on his Twitter saying: “I was so happy to meet my hero Jackie Chan that I held his hands and rubbed it against my face. He looked somewhat annoyed. I love you brother.”