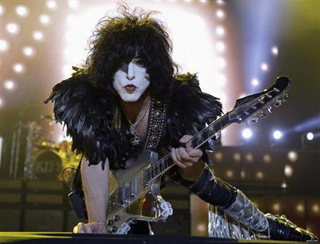 SYDNEY - Die-hard KISS fans looking for the ultimate in-concert memorabilia from the group’s current Australian tour need search no more. Why not acquire a guitar smashed onstage “in your honor” by guitarist Paul Stanley - for a mere $5,500?

Stanley, also a singer in the U.S. hard rock group known for its garish makeup, will also be selling the microphone he sings into for $3,000, along with special microphone and guitar combination packages, his Web site said.

If you purchase a KISS guitar during the Australian tour, currently underway until March 16, you also get to meet Stanley before the concert and view your yet undamaged guitar, which will be smashed that night in your honor, according to Stanley’s Web site (www.paulstanleyguitars.com).

Not included in the price, though, is your concert ticket.

“What a fantastic feeling I got seeing Paul Stanley smashing ‘my’ guitar at the end of an unbelievable show,” gushed one fan on the Web site after buying a guitar during an earlier British tour. Reuters