Brewers’ Braun keeps focus on the job at hand

Brewers’ Braun keeps focus on the job at hand 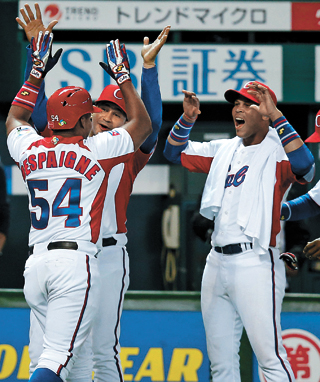 Cuba’s Alfredo Despaigne (54) celebrates after hitting a three-run homer in a 6-3 win against Japan at the World Baseball Classic in Fukuoka, Japan on Wednesday. Cuba plays the Netherlands, and Japan plays Taiwan today.[REUTERS/NEWSIS]

SCOTTSDALE, Arizona - Ryan Braun understands why many people are skeptical of him, given the way his name has twice been linked to performance-enhancing drugs.

He refuses to let it bother him.

On a sun-splashed field in Arizona, the Brewers slugger said that getting back to spring training has helped him deal with the swirling controversy, and that playing for the U.S. team in the World Baseball Classic could help to convince some fans to give him a clean slate.

“Obviously, there’s been a lot of things I’ve dealt with over the last year and a half,” he said, “but I’m just trying to focus on the things I can control.”

After his MVP season in 2011, Braun tested positive for steroids during the playoffs. But he fought the case and eventually had his 50-game suspension overturned by an arbiter who discovered chain-of-custody issues in the handling of Braun’s test sample.

Then this past offseason, Braun’s name surfaced in records from the now-defunct Biogenesis of America LLC clinic that allegedly provided substances to several players.

After his name was connected to the clinic, Braun issued a statement in which he said he used the clinic’s operator, Anthony Bosch, as a consultant in appealing his previous positive test.

Braun has so far refused to address his use of Bosch or the clinic in detail, but he did say that all of the allegations swirling around him have not become a distraction.

“You know, I think the longer you deal with something, the easier it becomes to deal with, if that makes sense,” he said. “Regardless of what the circumstances are, I’ve kind of lived this for the last year and a half, so I’m able to focus when I get on the baseball field, whether it’s personal issues or family issues or a situation like this. I just come to play.”

Last season, Braun led the league in homers with 41, was second in RBIs with 112 and finished third in batting with a .319 average, and nearly won his second straight MVP. He finished second to San Francisco Giants catcher Buster Posey in the voting.

Braun appears to be locked in this spring, too. After going 2 for 8 with a homer in four games for the Brewers, he left camp to catch up with the U.S. team at the WBC. In the first of two exhibition games Tuesday, he went 3 for 4 and scored a pair of runs in a 4-4 tie with the Chicago White Sox.

On Tuesday, any angst felt by fans over Braun’s connection to steroid use seemed to have washed away. Dozens of fans lined up along the fence line for autographs - and Braun dutifully signed many.

“There’s no more baseball in the Olympics, so this is the closest we get to an Olympics-style event. It’s only once every four years,” he said of the WBC. “For everybody that’s on our team, we take a tremendous amount of pride in being here, and the guys I know playing for Mexico and the Dominican [Republic] and Venezuela, they all feel the same way.”

So he intends to keep his focus on the field.

Easier to do now that games have started.

“I try not to think big picture too much. I focus on things I can control,” he said. AP