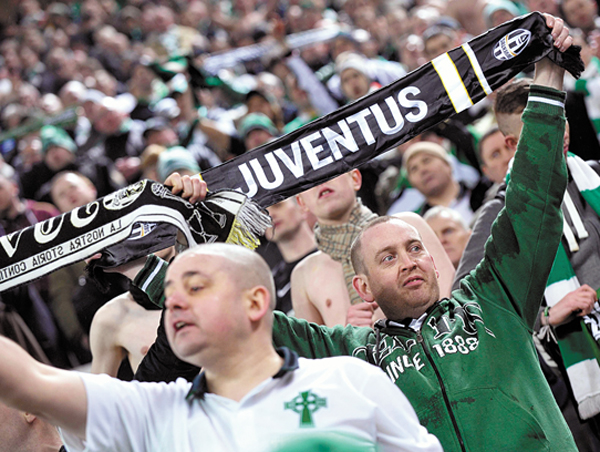 A fan holds up a Juventus scarf during a Champions League match between the team and the Celtic at Juventus stadium in Turin, Wednesday. [REUTERS/NEWSIS]

TURIN, Italy - Juventus avoided any slip-ups against the Celtic, finishing off the Scottish team with a 2-0 win Wednesday to seal a spot in the Champions League quarterfinals 5-0 on aggregate.

Holding a 3-0 lead from the away leg, Juventus withstood some early pressure from Celtic before Alessandro Matri essentially clinched the series when he put the Italian side ahead in the 24th minute.

Fabio Quagliarella doubled Juve’s lead in the 65th minute by slotting into an empty net from close range after being unselfishly set up by Arturo Vidal. It is the first time Juventus has reached the quarterfinals since it was demoted to Serie B in the 2006 match-fixing scandal.

“Celtic is a great squad, we were very focused, very prepared. We knew that this is a team that if you don’t study well, can hurt you,” Juventus coach Antonio Conte said. “To have managed to return to the top eight of football after so many years fills us - staff, players and whole club - with pride and enthusiasm.”

Juventus can start thinking about a possible Champions League and Serie A double, as it leads the Italian league by six points.

“Now we’re in the really intense part of the season, where you can’t afford to make a mistake,” Conte added. “We have to be very good, very focused in training as well as in the matches. We know we can get a lot of happiness out of this season, but it will be very difficult.”

In Wednesday’s other match, Paris Saint-Germainh drew 1-1 against Valencia to qualify for the last eight 3-2 on aggregate.

Juventus extended its unbeaten streak in Europe to 18 matches, having lost just one in its last 30 - including qualifying. The Italian club has not conceded a goal in its last five.

Like in the first leg, Celtic created plenty of chances but failed to take advantage, while the Italian team was ruthlessly efficient at the other end.