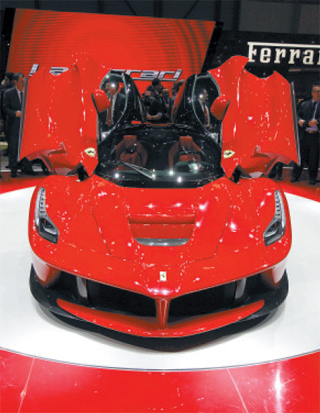 The new LaFerrari hybrid car is pictured on the Ferrari stand during the first media day of the 83rd Geneva Car Show at the Palexpo Arena in Geneva Tuesday. [REUTERS/NEWSIS]

Ferrari and McLaren both on Tuesday unveiled sleek hybrid supercars sculpted from carbon fiber at the Geneva Motor Show.

LaFerrari is the name of the new special edition Ferrari, meant to be the definitive. “Owners say they have a Ferrari,” Chairman Luca di Montezemolo said. “This is THE Ferrari.” Montezemolo said the electric engine has a performance appeal that is proving a draw to Ferrari owners.

Only 499 of the models will be built -- and some 700 people, many of them Ferrari owners already, have registered interest meaning a tough selection process. It has a top speed in excess of 350 kilometers per hour (217.4 mph). The price tag: (euro) 1 million ($1.3 million).

Designer Flavio Manzoni said the engineering and design teams worked together from the start to ensure maximum performance.

Sculpted from carbon fiber, in a glittery racing yellow set off by hash-marked slate gray, the McLaren P1 cuts a racetrack figure while boasting superior -- for its class -- emissions under 200 grams per kilometer. That compares with over 300 grams/kilometer for a super car without hybrid.

P1 program director Paul McKenzie says the hybrid technology has performance advantages because the electric engine fills in the gap before the turbo engine kicks in. It’s a tiny effect, but everything counts in supercars.

Toyota, the world’s leader in hybrid technology with 5 million sales since 1997, welcomed the supercar entries to the market.

“If people start falling in love with hybrids, and if it’s a Ferrari or a Porsche, it is great. It is going to help hybridization,” said Toyota Europe executive Karl Schlicht.