7 ministers will finally be appointed

7 ministers will finally be appointed 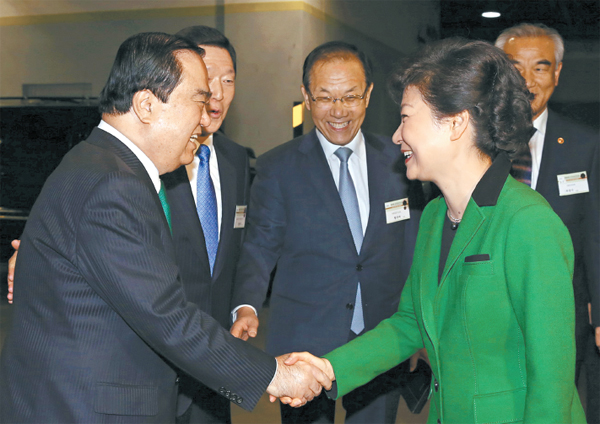 President Park Geun-hye will formally appoint seven ministers including the head of the Ministry of Unification on Monday, the Blue House said yesterday.

On Monday, Park will formally appoint ministers of unification, justice, culture and tourism, health and welfare, environment, employment and labor, and gender equality. They were to be appointed because the ministries that they will head are not affected by the government restructuring bills deadlocked at the National Assembly, Kim explained.

Nominees for the ministries that are affected, including the Ministry of Foreign Affairs, won’t be appointed next week because of the impasse at the legislature to change the Government Organization Act, Kim said.

The announcement of Park’s decision to appoint some nominees who passed the legislature’s confirmation hearings came after a barrage of criticisms from the DUP that Park was sabotaging state affairs by intentionally keeping a vacuum in the administration.

As of yesterday afternoon, 13 of Park’s 17 minister nominees completed confirmation hearings, and 11 of them were confirmed by the Assembly. Yoon Sang-jik was grilled yesterday to become the minister of industry, trade and resources.

The legislature, however, has not scheduled confirmation hearings for the ministries that will be affected by Park’s proposed government reorganization. Park also needs to find a new nominee to head the future planning and science ministry after her first choice withdrew his nomination.

The DUP yesterday criticized Park for intentionally delaying the formal appointments of the confirmed nominees.

“Already eight minister nominees passed the confirmation hearing [as of Wednesday],” Representative Park Ki-choon, floor leader of the DUP, said yesterday. “What does the Blue House mean by saying it’s not pretty to appoint them? The president is delaying the appointments for that reason. Does she think running the country is like running an art museum?”

The DUP leader was referring to remarks Blue House spokeswoman Kim Haing made on Wednesday.

“Appointing just one minister doesn’t look very pretty,” she said during a press briefing about the possibility that Yoo Jeong-bok will be formally named the public administration and security minister first.

Representative Woo Won-shik, deputy floor leader of the DUP, also urged Park to appoint the ministers so they can start working.

“The president is sabotaging the country,” he said. “She is going so far to bring the opposition party to its knees.”

Earlier in the day, the National Assembly remained at loggerheads over the government restructuring plan, while Park and the main opposition party continued to blame each other.

At an annual meeting of church leaders, Park yesterday pressured the Democratic United Party to approve her government restructuring plan.

“I think the political leaders of our country should rethink what their true responsibility is at this point,” she said.

“Park is once again blaming the opposition party and the legislature, but she is responsible for the delayed launch of her government for being so slow in launching her transition team, nominating cabinet members and submitting the government restructuring bills,” DUP spokesman Park Yong-jin said.

He also accused the president of failing to perform her presidential duty in order to hurt the opposition. “She delayed formally appointing minister nominees who passed confirmation hearings and boycotted the cabinet meeting for the second week, although she says it is a national emergency. Her sabotage to pressure the opposition party has gone too far.”

The DUP, however, was slammed by Saenuri lawmakers for using the negotiation on the government restructuring deadlock for its political goals.

The DUP demanded that senior executives of the public broadcasters should be appointed with two-thirds approval of the Korea Communications Commission members. He also demanded MBC President Kim Jae-chul be fired and hearings be held to discuss the situation at some broadcasters including MBC.

The Saenuri Party rejected the plan and accused the DUP of hypocrisy. Until now, the DUP has insisted that its objection to the government restructuring was that Park wanted to take authority over broadcasters from the KCC, which has opposition members, and give it to a new Ministry of Future Planning and Science. Officially, it said that would undermine broadcasters’ independence.

“The DUP’s demand to force the MBC president out is a de facto political intervention with a public broadcaster,” said Representative Shin Yee-jin, spokeswoman of the Saenuri Party. “The DUP said it wants to protect the political neutrality of broadcasters, and its demands are a clear contradiction.”

The Blue House also rejected the DUP’s demands. “The DUP linked the government restructuring bills to the fate of the president of a broadcasting network,” Kim, presidential spokeswoman, said Wednesday. “This is the evidence that the DUP is using the situation politically.”

Some DUP members said the leadership’s latest proposal was inappropriate.