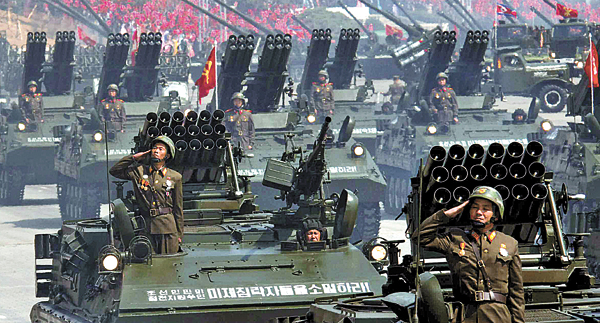 In yesterday’s front page photo in the Rodong Sinmun, the type of rocket launchers used by the communist regime to bombard South Korea’s Yeonpyeong Island in November 2010 was featured prominently. [Rodong Sinmun]

Pyongyang has dispatched its troops and weapons to a strategically important region, a military source told the JoongAng Ilbo, seen as a plan for a statewide military drill against Seoul and Washington.

A high-ranking South Korean government official said on Wednesday that “recently, troops and weapons of the North Korean Army, Navy and Air Force are being sent to units near Wonsan.”

“We assume the troops [in Wonsan] will stage a large-scale military drill in response to the Key Resolve and the Foal Eagle,” the official said. 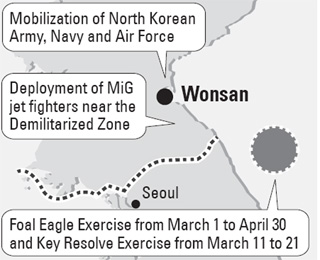 The Key Resolve and Foal Eagle are the names for two separate drills from the U.S.-South Korea joint drill.

“Given the fact that a cargo train is moving from Pyongyang and Wonsan, carrying long-range artillery, we judge they are going to start a live-fire exercise.”

Wonsan, the capital of Kangwon Province of North Korea, is a port city on the east coast. It is also a strategically important city where a military airfield is located.

The Southern military sources also said Pyongyang is gathering weapons from units nationwide and sending them to the Wonsan bases.

The North also allegedly forbade ships from sailing in the East Sea and the Yellow Sea in their territory and airplanes from flying over the waters, during the period when the South Korea-U.S. joint military exercises start next Monday.

The commander of the North’s 4th Corps, Byon In-son, who is reportedly in charge of North Korean defense in the Yellow Sea, also reportedly visited Daesuap Island, located only 15 kilometers (9.3 miles) north of Yeonpyeong Island of South Korea, raising military tensions near the border.

“In 2010, then-4th Corps Commander Kim Kyok-sik visited a subordinate artillery unit, and three or four months later, the shelling of Yeonpyeong Island followed,” a National Defense Ministry official said. “Recently, Byon is showing similar moves with that of Kim at the time.”

The ministry official also said that the 4th Corps conducted a test-fire exercise targeting Seoul on Feb. 25 as well.

Also, a series of fighter jets has been moved from Wonsan Airfield to Guup Airfield, which is just 50 kilometers away from the inter-Korean border, the South Korean military detected.

Starting from noon on Wednesday, the South Korea-U.S. joint monitoring system has been in full-scale operation.

Pyongyang once again threatened yesterday to “press the nuclear button,” following the recent warning to stage a nuclear attack on Seoul and Washington and end the 1953 treaty that ended the Korean War.

“Today, our military’s potential capability has become even stronger and we can bear any kinds of war, even a nuclear war,” the North’s ruling Workers’ Party’s newspaper Rodong Sinmun said in its editorial yesterday on the front page.

“After the Choson Armistice Agreement becomes nullified, it wouldn’t be that strange if a worldwide thermal nuclear war occurs.”

“Between us and the United States, there is no legal binding [obligation] if which one presses the nuclear button first,” it said.