Gumi blasted with third disaster in under a week

Gumi blasted with third disaster in under a week 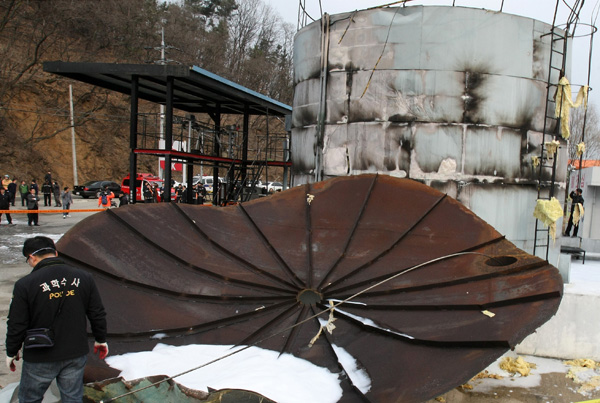 A police officer inspects the scene of an explosion where a 200,000 liter tank containing 4,000 liters of bunker B-oil exploded at Hankook Mineral Oil, in Gumi, North Gyeongsang, yesterday. By Gong Jeong-sik

People in Gumi, North Gyeongsang are terrified as a tank at an oil refinery exploded yesterday only days after a chlorine leak was preceded by an acid gas leak.

Three officials of the company were close to the accident site, but were able to find safety. No injuries were reported. The police and fire authorities are currently looking for the cause of the explosion.

“I heard loud blasts then immediately felt a tremor when I was working in the office,” an official of the company said. “I saw black smoke coming out from the tank, but flames quickly leapt toward the sky.”

The fire department in Gumi immediately dispatched 193 fire fighters and 20 fire trucks and eventually put out the fire at 8:51 a.m.

The police and fire authorities said they will find the exact cause of the explosion by cooperating with the National Forensic Service.

“We are so scared due to these never-ending industrial disasters,” said Gumi resident Kang Ji-myeong. “I feel like I have to move to another city.”

On Tuesday, workers at Gumi Chemical in the complex at Gongdan-dong yesterday were in the process of transferring liquid chlorine from a storage tank to a truck when a leak in a valve led to exposure to chlorine fumes at 8:50 a.m.

At 8:34 p.m. on Saturday, at the LG Siltron semiconductor factory in Imsu-dong, Gumi, about 30 to 60 liters of harsh chemicals containing nitric acid, hydrofluoric acid and acetic acid leaked into air. LG Siltron failed to report the leak to authorities until 16 hours later, around 12:30 p.m. Sunday, and faces allegations of a cover-up.

This is following a massive hydrofluoric acid leak from a chemical plant in Gumi, North Gyeongsang, over three months ago in September, which killed five and led to many more illnesses.

“We can’t understand how this kind of accident occurs in such a short time period,” a Gumi resident said.