Safety theme park in Gangwon is a total bust

Safety theme park in Gangwon is a total bust 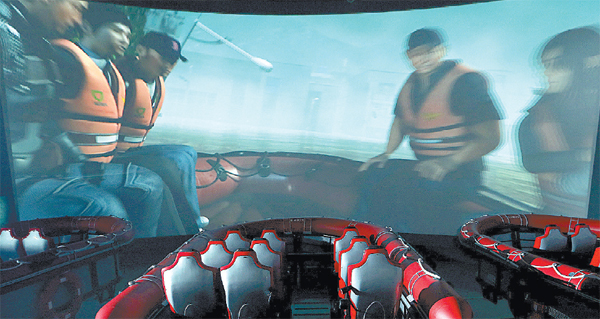 A natural disaster experience at Taebaek 365 Safe Town has failed to attract many tourists despite the hefty budget spent on the park. By Park Jong-geun

On Wednesday, the parking space for the park, which is dedicated to teaching children safety lessons about fire, earthquakes and other natural disasters, was totally empty.

Only eight people visited the park that day.

When the central government decided to invest 113.3 billion won ($104.5 million) in the park in 2003, it wanted to raise safety awareness among children. An additional 40 billion won was invested by the Taebaek city government to bring tourists to the city

But only 17,095 visitors have come since its opening last October.

“I know it’s a weekday, but it’s quite hard to comprehend that you can’t even spot one visitor,” said Jeong, a 38-year-old local who came to meet his friend working there, “at a place that cost the town so much money. I’m concerned as a Taebaek citizen.”

Its operating cost for 2013 is 4.5 billion won, which includes its allocated budget of 3.2 billion won and salaries of 27 civil servants who work on the park project. Unless business picks up miraculously, the project is set to cause 4 billion won in losses each year.

In hindsight, it wasn’t a good plan in the first place since Taebaek is a three-hour drive from Seoul and neighboring Gyeonggi, making day trips for most schools impossible.

Many have called on the regional government to build more accommodations for overnight visitors, but that would simply cost more.

The park’s dusty technology hasn’t done much to draw kids.

“When it was first designed eight years ago, the Safe Town was equipped with cutting-edge technology,” said Park Cheol-wan, a director of strategy and planning of MBC Play Be which runs family entertainment family center Kidzania in southern Seoul. “But now its 3-D or 4-D facilities are not that spectacular. The park needs more appealing features to give fresh experiences.”

“It’s winter, which means it’s off-season,” said Kim Jin-geum, a planning manager of the park. “I think we need to put more efforts in promoting the park.”