Warrant to be filed for ex-KBL star

Warrant to be filed for ex-KBL star 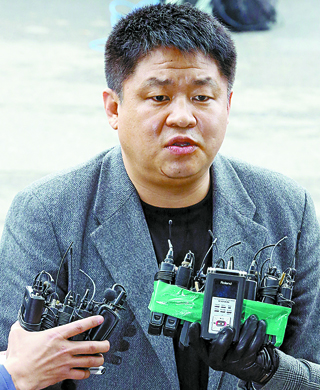 Prosecutors said yesterday they will file a warrant to detain Kang Dong-hee, 46, manager of the Wonju Dongbu Promy basketball team and a former Korean Basketball League (KBL) All-Star, for his involvement in fixing games in return for cash, as they confirmed his violations after questioning him.

The prosecution said that Kang fixed four games in the 2011 season that were held in March after receiving about 50 million won ($46,000) from two brokers, a man surnamed Choi, a former sports agency official, and Cho, 39, a former professional baseball player.

“We could confirm such allegation is true after questioning him,” a spokesman of the Uijeongbu District Prosecutors’ Office said.

Kang was summoned by the prosecutors’ office in northern Gyeonggi at 2 p.m. and said, “I never received money for fixing a game,” when about 100 reporters surrounded him and asked about his allegation.

“He [the broker] is just a friend that I have been in touch with for about 10 years,” Kang said. “We have been lending and borrowing small sums of money from each other, but it wasn’t for fixing a game. He asked me to do it, but I refused.”

However, the prosecutors said they were able to find Kang’s involvement in match-fixing while investigating illegal Internet betting sites. Choi was arrested by prosecutors on Feb. 28. “I received money from other people who purchased Sports Toto tickets and gave portions of them to Kang,” Choi was quoted as saying.

He claimed that Kang influenced the flow of a regular season game by making substitutions when the game was at a crucial moment, so players weren’t able to know it was going on. The prosecution said it was reviewing the games that the broker has pinpointed, but didn’t state which game Kang is suspected of fixing.

“I can accept a three-party meeting with prosecutors and Choi if they want,” Kang told reporters. “I will sincerely answer prosecutors’ questions.”

Kang received 260 million won salary for 2011 season and signed a three-year contract for an average of 400 million won ($368,799) annual salary after leading the team to second place in the 2011-12 season. He is the second highest-paid manager in the league. Chun Chang-jin, manager of KT Sonicboom receives 450 million won a year.

The prosecution added that they could expand their investigation into active KBL players and other managers.