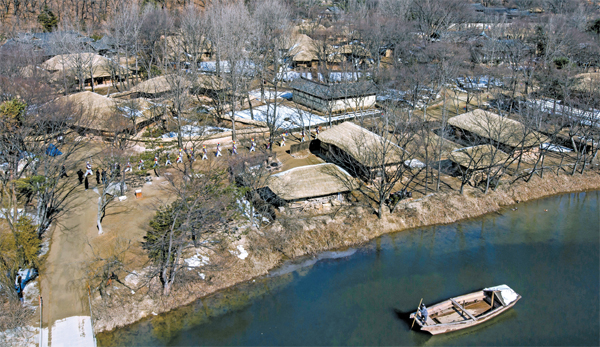 The Korean Folk Village in Yongin, Gyeonggi, attracts many visitors with its authentic atmosphere. By Shin Dong-yeon

Change is in the air at the Korean Folk Village in Yongin, Gyeonggi. Though it dates back to the Saemaeul Movement in the 1970s, new programs like a haunted village spectacle have drawn renewed attention.

The historical site was the product of advocacy by poet Lee Eun-sang and his comrades to protect traditional villages slated for demolition.

The end result was that in 1974, some 230 traditional hanok were brought together in Gyeonggi where the popular theme park now stands.

The historical amusement park, which will soon celebrate its 40th year, is the only one of its kind dedicated to celebrating Korean history and culture.

The site boasts an array of seasonal events where visitors can personally experience the old way of doing things.

As theme parks hold different promotional events throughout the year, the Korean Folk Village jumps on board, although always in a slightly different way.

When other parks have Halloween parties, it hosts a roof-thatching festival or a thanksgiving display instead.

During the Lunar New Year holiday, the village was the only theme park to slot in totem pole events and tug-of-war among other traditional festivities that are now just remnants of the years gone by.

As you step into the theme park today, you’ll catch a glimpse of the past and the hard work put in by contemporaries to reclaim the unique culture.

A visit to the Korean Folk Village is a lot more fun with a few insider tips.

To begin, take a good look at the guide map and its numbers. It is best to move around in the order indicated.

As you enter the main gate and the town’s shopping district, you will find yourself at the front of Naesammun (inner three gates). These gates are usually erected outside a palace or a manor house. They mark the entrance to the residents’ living area.

Another popular item among tourists are the lucky bags that can be seen on the gates during the Lunar New Year.

As you pass through the gates, you’ll also see totem poles aplenty. Although they don’t seem to have much function most of the year, during the Lunar New Year they become the highlight of the amusement park complex.

On the day of the first full moon, totems are paired off and married in an exciting ceremony. Banquets are prepared for them and it is customary for four sturdy men to carry the totems, making them bow to their wooden spouses.

The reason behind the festivity is that according to folklore, happier totems mean better luck for the village.

Following the nuptials, the newlywed figurines are bound together by cloth to seal the deal. 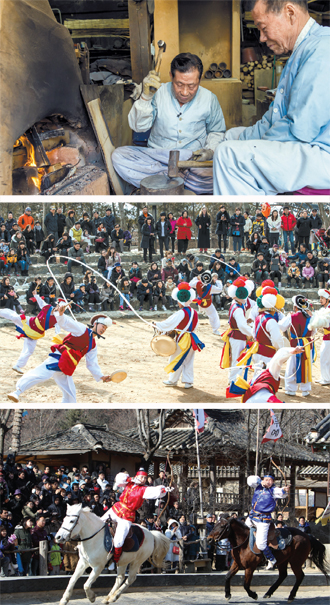 From top: Brothers Kim Sang-gu and Kim Sang-guk, 76, work in the bronze craft room. Visitors enjoy a farmer’s music and dance show. “Equestrian Feats,” which features archers on horseback, is also a hit with the tourists.

Every house tells a tale

Beyond the pottery museum there is a 160 year-old manor house.

This estate used to be located in Jangseong, South Jeolla, before being transported up north.

One thing to look out for is the pole that stands at the front.

In South Jeolla, it is customary to hang rice sheaves on the pole before the first full moon of the year. On the day itself, children sing songs to welcome in a bountiful year ahead.

Crops hanging on the pole are later used to make tteokguk, or rice cake soup, for farmhands on Feb. 1. The tradition of a short break gave Feb. 1 the apt name Farmhands Day.

The South Jeolla house is certainly not alone. Currently, there are more than 260 traditional buildings inside the complex, 30 more than on opening day 40 years ago.

Each house tells a tale of its own, and visitors are able to hear each story. Each roof and chimney offers a glimpse into the people who resided within.

Farmers’ houses usually come with short chimneys jutting out of the kitchen. On the other hand, affluent households dig holes in the ground for fire, which means a chimney is constructed outside the property.

Another interesting building is the Buddhist temple brought from Yuseong, South Chungcheong. The Geumryun temple is currently home to two Buddhist nuns.

But if looking to the future is more your thing than observing religious rituals, then there are also fortune tellers at the complex to give guidance. They charge 20,000 won ($18).

Inside Property No. 33, otherwise known as the Jeju Island House, you will be able to come face to face with the Jeju black pig, famous for its delectable taste among pork enthusiasts.

The only downer is that there is no translation of the inscribed verse couplet written in Chinese characters.

Electricity, a thing of the future

Fans of Korean dramas will be pleased to know that more than 60 dramas have been filmed at the complex.

Hits like “The Moon that Embraces the Sun,” “Dae Jang Geum” and many other period pieces have employed the historical site in their portrayals of historical Korea.

In particular, Property No. 29, Manor House No. 22 and the wooden bridge are popular spots for filming.

But it is more interesting that despite being the set of many productions, the folk village has no electricity.

Every time a production crew comes to town, it must use a generator car. Its tracks are always wiped off the dirt road - the price of keeping a realistic ambiance.

In the winter, top actors have to endure the blistering cold due to the difficulty of setting up a heated room.

Despite the inconveniences, though, there is a long list of dramas that want to use the village as a set.

And why not? The place has it all.

For those who are curious about what happened to outlaws during the Joseon Dynasty (1392-1910), there is even a prison where tourists can learn how to handle a sword.

And Building No. 22 was a home for nobility constructed in 1850 in Hwasung, Suwon. Consisting of 99 rooms, the house boasts guest lodging that served as the Suwon District Court during the Korean War.

There are also various streams and walls surrounding the complex with which you might be familiar from watching television.

From this month, there are also ferry rides for visitors (3,000 won for adults and 2,000 won for children).

Everything at the Korean Folk Village screams authenticity: there is someone who spins the wheel for silk thread, weaves bags out of straw, forges steel for hoes and sickles, and ferments kimchi.

This adherence to tradition may explain why the venue is a hit with elders.

On site, there are senior citizens who have earned the status of “Master Craftsman.” There are 18 in total with an average age of 67.

In the tobacco pipe craft room, Jo Jae-suk, 84, does his thing; meanwhile, the twin brothers Kim Sang-gu and Kim Sang-guk, 76, draw crowds at the bronze workshop.

The director of the village, Kim Suk-gyu, said the relationship between seniors and Korean culture is a no-brainer.

“We can learn a lot from our elders about the ways of our ancestors,” Kim explained.

Wash it down with wine

Those who visit the folk village won’t be able to call it a day until they’ve had a taste of traditional cuisine.

The fact that most of the produce used at the stalls and restaurants inside the village is harvested on site also adds to the hands-on experience, not to mention the taste.

The rice paddies and fields you see scattered throughout the complex are where most of the ingredients come from. More than 20,000 cabbages are turned into kimchi right there on premises. What it can’t harvest from the fields, the village gets from a farm on Ganghwa Island.

There is a food court in the marketplace of the village where tourists are able to finish the day with various dishes including soup with rice, no doubt the most popular meal with more than 60,000 bowls served yearly.

The village rice wine is deemed a cultural asset of Gyeonggi and is another popular concoction.

Other tourist favorites are clear soup with dumplings and seafood-onion pancake.

The food alone is sometimes reason enough to pay a visit.