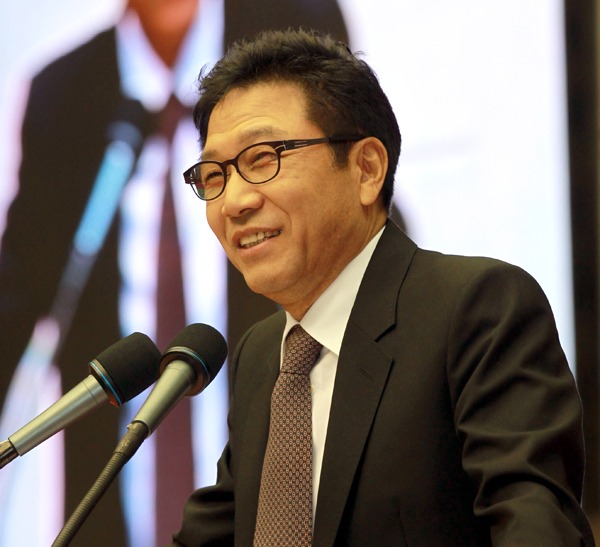 Lee Soo-man, chief executive of SM Entertainment, delivers a congratulatory message to some 6,000 freshmen at Seoul National University on Monday. By Chung Si-jong

There were loud cheers and chants as Lee Soo-man, chief executive of SM Entertainment, appeared on stage to deliver a congratulatory message to some 6,000 freshmen at Seoul National University (SNU) on Monday.

Lee, also a graduate of SNU, was invited by the university to encourage students who recently entered the university, drawing on his experience as a global leader.

“If we create culture, then follows economic development, which in the end creates a strong national brand,” Lee said. “Like the United States, the name Korea can become powerful. It is your role to find out the answer on how to make the Korea brand flourish.”

Lee entered the university in 1971 and studied at the school’s agricultural machine department.

Lee, a 61-year-old businessman who founded SM Entertainment, one of the country’s leading entertainment agencies, was speaking at the university’s entrance ceremony.

They are all Seoul National University graduates. The school said that “Lee Soo-man has lived a life taking on new challenges” and that “he was chosen as a speaker to inspire students with new challenges.”

Lee also shared how he entered the world stage with K-pop. He is considered a pioneer who spread K-pop to other countries.

He said that in 1969, he was shocked when he saw English singer Cliff Richard.

“Foreign singers [like Cliff Richard] are so popular in Korea but why not Korean singers overseas?” he said. “That question led me to enter the overseas market for the first time in 1997. Hallyu [Korean Wave] spread after H.O.T [an idol group from the 1990s] held its concert in Beijing in 2000, and that led to the recent 2011 [Hallyu] Paris concert. It is important to ask yourself a question of what you can challenge.”

He also inspired the students to become global leaders.

“When you propose and develop something in your sector, you have to think also of how you will contribute to the people and the world,” he said. “You should draw a big picture and dream a meaningful dream.”