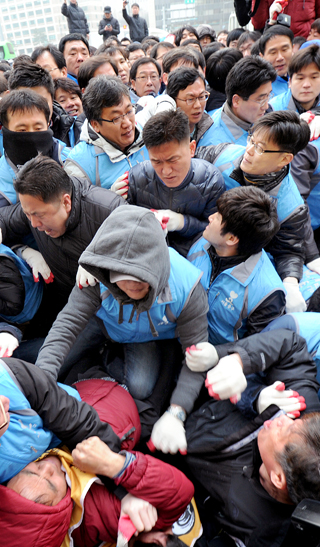 About 100 civil servants from the Jung District Office tussle with about 150 protesters who blocked them from removing the fired Ssangyong workers’ sit-in camp at 7:50 a.m. yesterday. The attempt failed, and four people were injured in the scuffle. [NEWS1]

The 52-year-old man surnamed Ahn who was arrested for setting fire to the sit-in camp occupied by fired Ssangyong Motor workers in front of Daehanmun, the main gate of Deoksu Palace in Jung District, central Seoul, on Sunday, is also the person who set fire to a restaurant in a food alley in Insa-dong that burned down six buildings and dozens of stores last month.


At around 8:25 p.m. on Feb. 17, a fire broke out in a restaurant of a three-story wooden building between exit No. 3 of Jonggak Station of subway line No. 1 and a food alley in Insa-dong, a few blocks behind the Jongno Tower building.

Twenty-three stores in six buildings, including the three-story building, were destroyed in 90 minutes. Seven citizens were sent to Inje University Seoul Paik Hospital in Uljiro, central Seoul, for smoke inhalation.

The police said that he was drinking at the restaurant with his friends and later set fire to some waste paper and clothing in the restaurant’s staff locker room in the second floor of the building with a lighter.

The police said Ahn confessed that he took pictures of the fire with his mobile phone from the 22nd floor of Jongno Tower. The police said they questioned Ahn before he was arrested for burning the Ssangyong sit-in camp after they found that Ahn rang the restaurant’s fire alarm bell four times after reviewing CCTV footage.

They suspected Ahn’s involvement in the fire but had to release him due to lack of evidence.

“The country is like a garbage paradise,” Ahn, who told the police that he grew up in Gangwon, was quoted as saying. “I hear someone speak to me to burn everything down every time I drink. I wanted to clean up this dirty city.”

The police said Ahn was hospitalized for 10 days to receive psychotherapy in 2005.“He possibly is a pyromaniac who takes pleasure in carrying out arson,” said psychiatrist Lee Jun-young from the Seoul National University Boramae Medical Center. “People like Ahn tend to set fires after being drunk and take pictures of the scene.”

At 5:30 a.m. Sunday, a fire broke out in tents where protesters were sleeping and storing their equipment, including placards and speakers, near the main gate of Deoksu Palace.

The fire consumed two of the tents as well as 8.5 million won ($7,700) worth of equipment and charred 27 rafters of the palace.

While the Namdaemun Police were interrogating Ahn, about 100 civil servants of the Jung District Office compulsorily tried to tear down the fired Ssangyong workers’ sit-in camp at 7:50 a.m. yesterday, but failed.