FC Seoul is still winless in 2013 after Incheon loss

FC Seoul is still winless in 2013 after Incheon loss 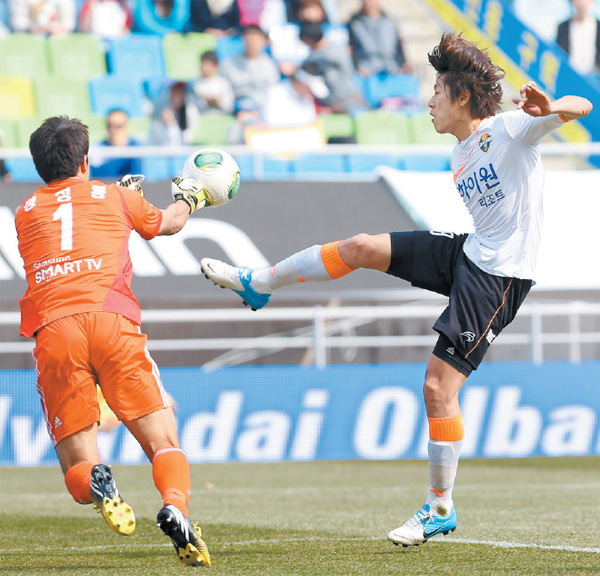 Suwon Bluewings goalie Jung Sung-ryong (1) blocks a goal attempt by Gangwon FC striker Kim Eun-jung during a K League Classic match in Suwon, Gyeonggi, on Saturday. Jung managed to stop all comers on the day, and the Bluewings won 1-0, leaving them undefeated so far this season. [NEWSIS]

Defending league champion FC Seoul was again thwarted in its quest for its first victory of the season on Saturday in a 3-2 upset at the hands of the Incheon United. Its rivals the Jeonbuk Motors and the Suwon Bluewings both bagged second straight victories.

It’s a slow start for Seoul, which only lost six games out of 44 en route to the season title last year. The team drew a 2-2 tie with the Pohang Steelers in its season opening match on March 2.

Adilson Dos Santos put Seoul on the scoreboard first as he directed a corner kick from Molina into the net with a header in the 28th minute. Incheon struck back seven minutes later with rookie Lee Seok-hyun firing a strong right-footed midrange shot that goalie Kim Yong-dae only managed to touch.

Incheon went ahead on a header from Diogo Da Silva Farias six minutes into the second half before Park Hee-seong scored an equalizer in his professional debut in the 68th minute. Moon sealed Incheon’s victory in the 78th minute.

The Jeonbuk Motors, the 2012 runner-up, went 2-1 against fellow Hyundai franchise Ulsan Hyundai on Saturday to mark its second straight win in the season.

At Jeonju World Cup Stadium, Park Hee-do scored the winner in the 57th minute. Leonardo Rodrigues Pereira scored first for the host in the 37th minute while Han Sang-wun of Ulsan scored an equalizer in the 41st minute.Jeonbuk has only lost once to Ulsan in their past 10 matches.

On Saturday, Jeonbuk goalkeeper Choi Eun-sung, 41, became the third player in league history to play 500 games. Choi played 15 seasons with the Daejeon Citizen before moving to the Motors last year. He now trails Kim Gi-dong, a Pohang Steelers midfielder, by only one game. Kim played in 501 matches before retiring from the Steelers after the 2011 season.

Kim Byung-ji, who moved from Gyeongnam FC to the Chunnam Dragons after the last season, has played in 605 games so far.

The Bluewings maintained its one-goal lead after Kim Do-heon scored in the 11th minute, marking a 1-0 victory over Gangwon FC on Saturday. It’s the second straight for the Bluewings, who brought in North Korean national team striker Jong Tae-se this year.

Seo Jung-won, Suwon coach, complimented Jong, who created several chances before being sidelined due to thigh pain in the 43rd minute. “Kim Do-heon and Jong Tae-se shone in the game with their skill and experience,” Seo said.

The Steelers routed the Daejeon Citizen 3-0 on Saturday, extending its undefeated streak against the Citizen to eight games. Cho Chan-ho scored two and Ko Mu-yeol added one for Pohang.

Yoon Bitgaram failed to score against his former club, the Seongnam Chunma, but Jeju United managed to earn a point thanks to Park Jin-po’s own goal in the 43rd minute. Yun Young-sun scored one for the Chunma and Jeju and Seongnam drew 1-1.