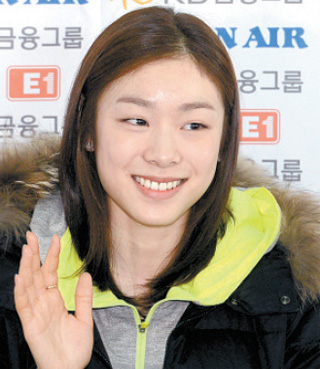 Defending Olympic champion figure skater Kim Yu-na says she is willing to settle for a top 10 performance at the upcoming world championships.

Kim left for Canada yesterday to compete in the ISU World Figure Skating Championship to be held at Budweiser Gardens in London, Ontario, this week. It will be her first world championship appearance in two years since her runner-up showing in the Moscow event in April 2011.

“I want to give younger athletes opportunities to experience a bigger stage, so it’s not just me going to the 2014 Sochi Olympics alone,” Kim, 22, told a media conference at Incheon International Airport before boarding her flight.

“It would be better for me to get three berths, but nobody knows how things will turn out, so I’ll try to get at least two.”

The top two athletes at the world championships will take home three Olympic berths for their countries. The other top 10 skaters will secure two. The skaters finishing between the 11th and 24th will earn a berth each.

The 2010 Vancouver gold medalist ended her 20-month hiatus from international competition with the announcement last July that she will compete at Sochi. She made an impressive comeback in December, winning the NRW Trophy in Dortmund, Germany. She then secured her spot in London with a victory at the Korea Figure Skating Championships in January.

She has said that her condition is now at 80 to 90 percent of her full potential, but she is cautious not to put too much pressure on herself.

“I’m worried and nervous because it’s the most important event [before the Olympics],” Kim said. “As I could make a mistake depending on my condition, my expectations of myself won’t be too high, and I’ll try to do it as comfortably as possible.” Kim is scheduled to compete in the short program on Thursday night Korean time and in the free skate on Sunday morning. Her short program is set to the tune of “The Kiss of the Vampire” and her free skate will be to a compilation of songs from “Les Miserables.”