As food companies and the government debate price increases, consumers check kimchi at a discount store in Seoul. Rice, flour and kimchi have gotten more expensive at stores around the capital. Daesang, the country’s largest packaged kimchi producer, raised prices on its 50 Chonggajip products by an average of 7.6 percent last month, and Pulmuone also announced it will raise kimchi prices. [NEWSIS]

A tug of war is getting tense between the government and the retail industry as the government tries to keep consumer prices from growing above 2 percent this year.

Government officials are holding constant meetings with executives of consumer goods manufacturers and retailers, putting growing pressure on them to stop raising prices.

Companies ranging from processed food makers, commercial good makers to discount stores seem to be complying with the government, but they’re not happy about falling profitability due to rising commodity prices.

Chung Jae-hoon, a managing director of the industry and economy bureau at the Ministry of Knowledge Economy got attention last week after he called in vice presidents of three major discount stores to demand more price cuts. Such a meeting was unprecedented for the Economy Ministry. 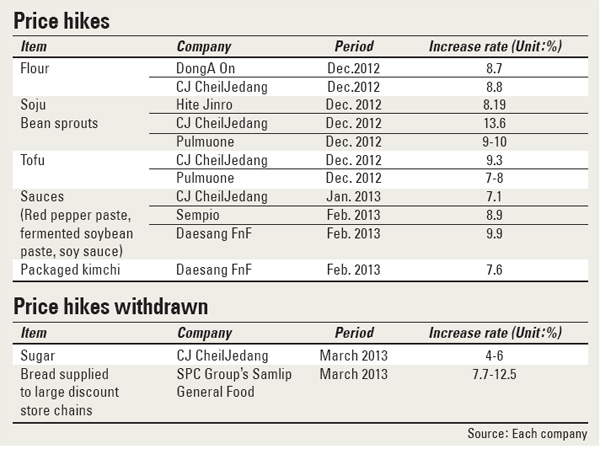 “The three executives agreed to find more products that are available for extra price cuts and hold extended sale events,” said Chung. “We will be watching if prices get stabilized for the next month.”

Chung emphasized that the government and the retail industry have been communicating with each other since last year after the two fought over the fair competition issue between large retailers and mom-and-pop stores and the enactment of the retail industry development act.

“There were no complaints from the retailers because they well understand the current situation,” Chung said. “Some manufacturers have raised prices due to increases in raw material prices, which was inevitable. But rises in raw material prices, for example, raw sugar, affect consumer prices by less than 0.1 percent. CJ and Daesang understand the government’s stance, and I hope they will be cooperative.”

CJ CheilJedang, the country’s largest food conglomerate, had planned to jack up the price of sugar by 4 to 6 percent but withdrew the plan last week.

The government will be monitoring consumer prices throughout the year, another government official said.

“There are no absolute levels that we can refer to as high or low,” said Park Yeong-sam, a director at the distribution and logistics bureau of the Economy Ministry. “But if commercial goods prices rise over 1 percent, that would seriously affect people’s budgets.”

Although consumer prices have remained in the 1 percent growth range over the past couple of months, prices of daily necessities such as fresh produce have remained high.

Aside from talking with the retailers, the government will take more aggressive steps to simplify the industry’s overly complex distribution system.

Park said the overly complex distribution system is the culprit behind the high prices of fresh food and daily necessities.

A government report noted that goods go through five to seven distribution steps before reaching the consumer.

The government plans to increase direct trade between farms and consumers and to work out a system for managing the supply of fresh produce. For processed goods, it plans to encourage alternative markets such as those for cheaper goods that have been repaired or refurbished, Park explained.

Sung Chang-hoon, a director at the price policy bureau at the Ministry of Strategy and Finance, however, denied that the government is being overly controlling of private companies.

“There could be some exaggeration, but the government isn’t directly intervening in determining prices at companies,” Sung said.

Meanwhile, companies say that the government’s price stabilization measure poses threats to food companies, which had been planning a series of price hikes during the presidential transition period claiming they were overdue hikes that were restricted under the former Lee Myung-bak administration,

Some food companies that had been swallowing the rising costs of raw materials, labor and fixed costs such as business expenses, finally raised prices of some of their products last December.

Although some analysts and the government suspected that these firms deliberately raised prices during the presidential transition because they expected political pressure to lessen after the Election Day in December, the companies denied such claim.

“No company will run a business in which costs outweigh revenues,” said a spokesman for Hite Jinro. “Under the Lee Myung-bak administration, we could not even meet the costs, as all the prices including those of raw materials, crude oil, utility bills and other expenses rose in five years, but the prices of our products didn’t.

“The price of our Chamisul soju has been the same for the past four years,” he continued, “which implies that a hike was long overdue. We raised the price of Chamisul by 80 won [7 cents], the least we could do, as soon as the former government stepped down. When considering the inflation rate in four years, the actual increase should have been in the double digits. But we kept it to a single-digit since we were aware of the sluggish growth in domestic consumption. However, it is still not profitable.”

Hite Jinro said the situation is similar at other food companies and that the government’s pressure to lower prices will bring negative growth to most of them.

The SPC Group’s affiliate Samlip General Food, which raised the prices of 66 bread items that were incurring losses when sold to large discount chains, announced a withdrawal of the hikes last Tuesday.

“When we make breads, the cost of raw materials accounts for about 32 percent and the fixed costs control about 68 percent. This means that rising international grain prices matter but so do rising costs of business expenses such as labor, utility bills and so forth. Also, flour only accounts for 14 percent of the cost of baking bread, so it doesn’t matter that we get to import international grains at a slightly cheaper price at a time like this, when the won appreciates in value,” said Park Kyung-bae, who works on the PR team at SPC Group.

“Regardless of the appreciation of won, and the cheaper imports of raw materials, we think that the former Lee Myung-bak administration’s price stabilization policy was unfeasible or somewhat impractical for most food companies,” he continued. “Since the new government has been carrying on with the policy and public opinion was against the price hike, we decided to withdraw it.”

Meanwhile, a backlash is expected from large discount store chains and super-supermarkets in Seoul after the Seoul Metropolitan Government advised them to stop selling dozens of food items as a measure to protect local merchants operating small businesses. The Seoul city government said last Friday it designated 51 products that need to be taken off the shelves of large discount chain stores such as E-Mart and Lotte Mart.

The list contained 17 kinds of vegetables including onions, bean sprouts and cabbage, seven kinds of sea food including mackerel and squid, five kinds of animal products including beef feet and beef leg bones, eight kinds of dried goods including seaweed and anchovies, nine kinds of perishable foods including tofu and eggs, as well as soju, beer and trash bags. The government’s recommendation is not legally binding, according to the Seoul city government.