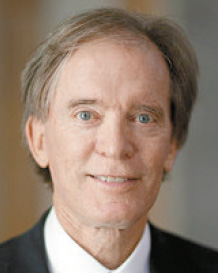 Bill Gross, whose Pacific Investment Management coined the phrase “new normal” in 2009 to describe an era of subpar growth and a diminishing role for developed economies, sees the U.S. outlook brightening - at least for 2013.

Gross, co-chief investment officer of Pimco, doubled his forecast for growth in U.S. gross domestic product to 3 percent for this year, up from the firm’s December forecast of 1.25 percent to 1.75 percent in 2013.

The U.S. is “moving toward a 3 percent real GDP growth rate” in 2013, in part because of housing, and a nominal growth rate of 5 percent, Gross said Saturday in an interview with Tom Keene and Mike McKee on “Bloomberg Surveillance.”

The acceleration in growth comes almost four years after Pimco unveiled its vision of a “new normal,” a five-year forecast of lower returns, heightened government regulation, shrinking U.S. clout in the world economy and bigger role for developing nations. That outlook, issued in May 2009, proved prescient as the U.S. economy has grown at an average annual rate of 0.6 percent over the past four years, according to data compiled by Bloomberg.

The housing recovery and advancing stock prices are making it easier for households to tolerate higher payroll taxes and a logjam in Washington over the nation’s budget. Job growth surged last month as automakers, builders and retailers pushed the unemployment rate to a four-year low, defying concerns that budget battles in Washington would harm the economic expansion.

Employment rose 236,000 after a revised 119,000 gain in January, Labor Department figures showed today in Washington. A number of 200,000 is consistent with real GDP growth of 3 percent this year, Gross said in the interview. Economists predict 1.8 percent growth for the U.S. in 2013 for the full year, according to the median of 77 responses in a Bloomberg survey.

The larger-than-forecast increase in employment will not prompt the Federal Reserve to alter the central bank’s stimulus measures, Gross said. Fed Chairman Ben S. Bernanke told Congress last month that it would take a “substantial improvement” in employment to end bond buying aimed at keeping longterm rates low to stimulate the economy.

“Bernanke, Yellen and Dudley - the three musketeers - have made it obvious that even if unemployment gets to 6.5 percent, they are going to look around,” Gross said during today’s radio interview.

Pimco, based in Newport Beach, California, is a unit of the Munich-based insurer Allianz SE. Pimco managed $2 trillion in assets as of Dec. 31. Gross runs the $288 billion Pimco Total Return Fund, the biggest bond fund in the world.